Posted by Vincent Henderson on December 13, 2015 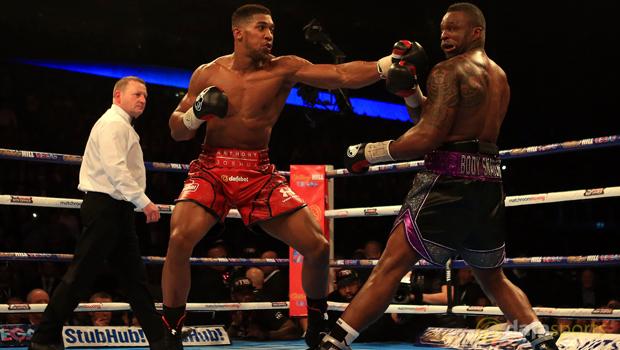 Anthony Joshua stopped old rival Dillian Whyte in the seventh round on Saturday night to claim the British heavyweight crown and move a step closer to a world title shot.

Whyte beat the 2012 Olympic champion when the pair were amateurs and had appeared confident in the build up to Saturday’s clash.

Joshua, 26, went into the fight with a record of 14 wins, having fought just 24 rounds after stopping all of his previous opponents inside the first three rounds.

Whyte managed to withstand some huge blows from Joshua and landed a few quality shots of his own, but a Joshua hook to the temple in the seventh rocked the 27-year-old before he was finished off with a massive uppercut.

Joshua claimed the vacant British heavyweight title with his 15th win but he feels he will have to be patient for a world title bid.

“A world title fight is still far away,” Joshua told the BBC.

“Becoming an elite athlete in such a tough sport, it doesn’t happen overnight but I’ve got the desire, ambition and the team around me to do it but I don’t want to rush it because when I get there, I want to stay there.”

Joshua has been tipped to take on Dereck Chisora next, after the British former world title challenger downed Jakov Gospic on the same bill after stepping in as a late replacement.

A clash with David Haye has also been mooted but the former world champion will have to get past Mark de Mori in his comeback fight in January first.