Posted by Vincent Henderson on December 11, 2016 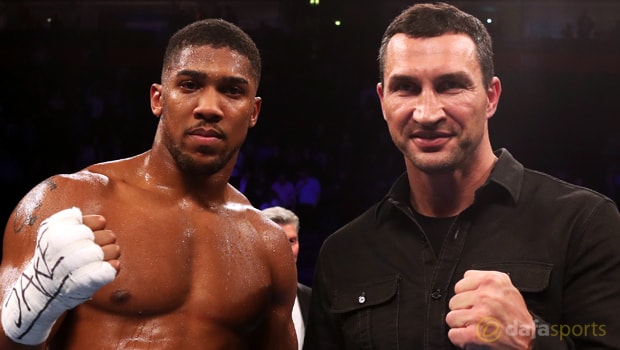 Anthony Joshua and Wladimir Klitschko have announced they will meet at Wembley Stadium in April for a much-anticipated heavyweight bout.

Joshua successfully defended his IBF heavyweight title with a third-round stoppage of Eric Molina in Manchester on Saturday night, after which Klitschko joined him in the ring to confirm their future meeting.

Making the second defence of his title, Joshua had his American opponent in trouble from the end of the opening round and he floored him in round three leaving the referee with no option but to halt the fight.

The 27-year-old Olympic gold medallist now has 18 knockouts from as many professional fights.

Klitschko, himself a former Olympic champ, lost his WBA, IBF and WBO belts to Tyson Fury last year but is very much up for the challenge of facing Joshua in London in April. “He is the best man in the division and the excitement speaks for itself,” said the Ukraine fighter.

“This is what the fans want and this fight must happen.” Joshua, meanwhile, says his three-year journey in the professional ranks has been building towards a fight of this magnitude.

“This is the step-up people have wanted,” said Joshua. “Klitschko wants his belts back and may the best man win.”

Reflecting on his victory over Molina, Joshua felt he did a professional job in taking care of the win.

He conceded that his opponent had landed a couple of decent shots, but that Molina lacked the power to cause him trouble. “It was slow, patient and calculating.

You are dealing with someone who is not giving you many options, so I had to create them and, once I saw it, I managed to connect properly and knocked him out,” said Joshua.