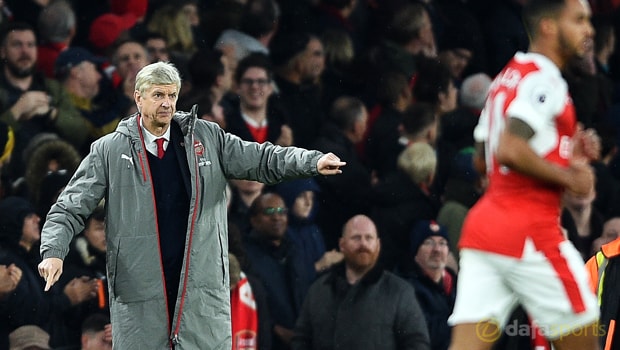 Arsene Wenger is happy that Arsenal are giving themselves a chance to fight for the title this season.

The Gunners lost their opening game against Liverpool in August but have not tasted defeat in 14 games since.

They battled back from the concession of a Charlie Adam penalty to overcome Stoke City 3-1 at the Emirates on Saturday.

Theo Walcott scored his 100th goal in club football to level before half-time while Mesut Ozil and Alex Iwobi secured the win in the second half.

The result hoisted Wenger’s team to the summit of the Premier League on goal difference – at least until Chelsea host West Brom on Sunday.

It is 12 years since Wenger last brought a Premier League title to north London but he insists Arsenal are building a platform from which they can challenge this season.

“We are there for the fight and we have been consistent after the first game. It is down to us to maintain the focus and the desire to improve.

We have a chance to fight at the top,” he said. Coming on the back of a midweek Champions League victory over Basel in Switzerland, Wenger conceded that it took Arsenal some time to hit their stride against Stoke.

He felt they were unfortunate to have a penalty awarded for Granit Xhaka’s challenge on Joe Allen but that his team showed mental fortitude to come back and win.

“We had a hesitant start, but when you play every few days sometimes it takes you time to get into a rhythm and that is what happened,” he told BBC Sport.

“We got a very unlucky penalty against us because it is not even a foul in my opinion. Mentally it was good for morale to get back to 1-1 before half-time.”

Arsenal are 1.91 to win their next game against Everton at Goodison Park on Tuesday. The Toffees, unbeaten at home so far, are 3.75 while the draw is 3.50.