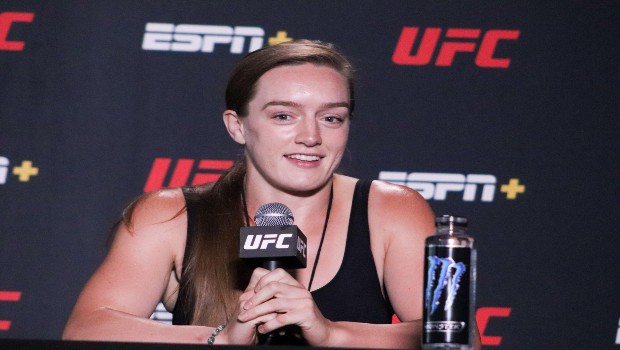 The Ultimate Fighting Championship has a jam-packed schedule and this Saturday we are getting what should be a very entertaining featherweight fight between Aspen Ladd and Norma Dumont. Ladd is replacing former UFC Women’s bantamweight champion Holly Holm, who will miss the fight because of a knee injury.

Aspen Ladd will return to the octagon after her concerning bantamweight weight cut from UFC Vegas 38. Almost two weeks have passed and Ladd evidently accepted the weight cutting issues she had and now she’ll compete as a featherweight, which will help her beat the scales.

Ladd has been considered a promising UFC prospect since her debut in 2017. She had an undefeated record before her arrival to the promotion and she has an impressive 4-1 record in the UFC. Germaine de Randamie beat her via TKO in the first round at UFC Fight Night 155 on July 13, 2019 but her skillset has been unmatchable in the rest of her fights and she got back on track with a TKO in the third round against Yana Kunitskaya at UFC on ESPN 7 on December 7, 2019.

While Ladd hasn’t entered the octagon in almost two years, this isn’t a red flag since no injury caused it and because of her young age. Ladd’s skill level has likely risen in the last two years. I’m expecting a more complete version of her on Saturday.

Norma Dumont was a champion in Sanda – a Chinese form of kickboxing, before beginning her MMA journey. A professional mixed martial artist since 2016, the Brazilian went 4-0 in the mixed martial arts regional scene of her country before the UFC signed her in 2020.

Dumont is now 6-1 in her career and she’s won her last two fights. Megan Anderson knocked her out in the first round in her UFC debut at UFC Fight Night 169 on February 29, 2020 but she bounced back with decision wins against Ashlee Evans-Smith and Felicia Spencer. In her last fight, the 31-year-old won a split decision against Spencer at UFC Vegas 27 on May 22.