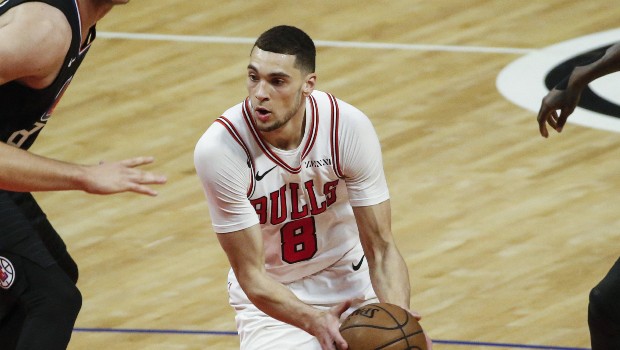 Chicago Bulls star guard Zach LaVine asked the team’s front office for help and they delivered, signing Lonzo Ball and trading for DeMar DeRozan. Ball gives the Bulls their first true point guard since Derrick Rose in 2016. This ain’t that same Lonzo Ball from the Lakers. Unlike Ben Simmons, he worked hard to become a real shooter. Lonzo changed his form and it’s showing this preseason as he’s shooting 64 percent from 3-point range so far.

This is what Zach LaVine said about Lonzo Ball recently: “He’s one helluva shooter. We had it scouted last year. He was shooting above 40 percent from 3 until he hurt himself at the end of the year. If you’re shooting above 40 on eight attempts, you’re a really knockdown shooter. That’s a part of his game that teams are really going to have to respect. And if not, they’re going to get their head cracked like they did tonight.”

LaVine was asked to name the lineup during an interview with Marc J. Spears of The Undefeated last year. He went with Derrick Rose at point guard, himself at shooting guard, Michael Jordan and Scottie Pippen as forwards and Pau Gasol at center.

Rose averaged 19.7 points and 6.2 assists in 406 games over seven seasons with the Bulls and he is in the top 10 in franchise history in both points and assists. He is also the youngest NBA MVP in league history.

LaVine has played like an All-Star for a while. The two-time NBA Slam Dunk Contest champion had a career year, averaging 27.4 points, 5.0 rebounds and 4.9 assists while shooting 50.7 percent from the field and 41.9 percent from 3-point range in 35.1 minutes over 58 games last season.

Jordan, the greatest basketball player of all-time, leading the Bulls to six NBA Championships. MJ averaged 31.5 points, 6.3 rebounds and 5.4 assists in 930 games over 13 seasons with the Bulls.

Pippen was the perfect sidekick to Jordan, averaging 17.7 points, 6.7 rebounds, 5.3 assists and 2.1 steals in 856 games over 12 seasons with the Bulls. Jordan and Pippen rank first and second respectively in Bulls franchise history in games played, minutes played, field goals and points.

Pau Gasol played 150 games for the Bulls over two seasons and averaged 17.6 points, 11.4 rebounds and 3.4 assists while making two All-Star teams. LaVine should have taken Dennis Rodman over Gasol but I can understand that his lineup would have lacked size.