Khabib Nurmagomedov: Conor McGregor will have to wait

Posted by Vincent Henderson on January 31, 2018 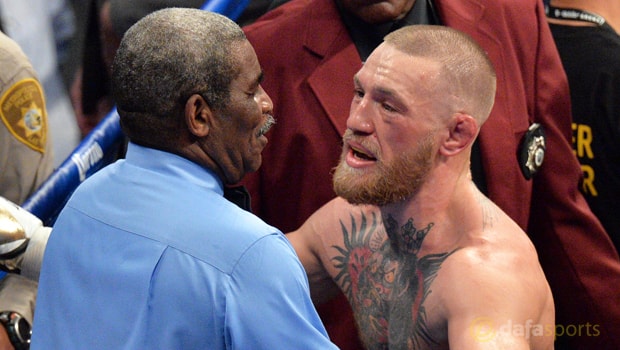 Khabib Nurmagomedov has warned Conor McGregor that he will have to wait in line for a title shot if he defeats Tony Ferguson for the lightweight strap at UFC 223 on April 7.

The undefeated Russian has battled his way through the rankings since making his debut in the UFC in 2012, winning all nine of his trips to the octagon, and he is deservedly set for a crack at the lightweight title.

Nurmagomedov will take on American Ferguson for the vacant belt, which has been vacated by McGregor following an inactive spell in the sport.

McGregor beat Eddie Alvarez to claim the title in his first ever fight at that weight in November 2016 but he has not stepped back into the octagon since.

Initially there was confusion as to whether Nurmagomedov and Ferguson were just fighting for the interim belt but The Eagle has confirmed that McGregor will be no longer be champion come April 8.

Nurmagomedov said: “I spoke with Dana [White], I spoke to everybody about this situation. But they say we are going to fight for a vacant belt, vacant undisputed belt.

“This is not Tony Ferguson’s interim belt, this is a vacant belt. And after when we fight (on) the 7th of April, on the 8th of April they are going to make it official — whoever wins becomes the real champ.

The number two ranked contender is pretty confident of finding a way past Ferguson and he insists McGregor will have to get to the back of the queue.

“When I become UFC lightweight champ I am going to say ‘hey, who is a real contender, who has five, six or seven wins streak.’

They have to fight for the title, not you. We will see what happens, but I don’t think that he will ever fight with me. I think they understand what will happen.”