Posted by chris schweizer on February 8, 2016 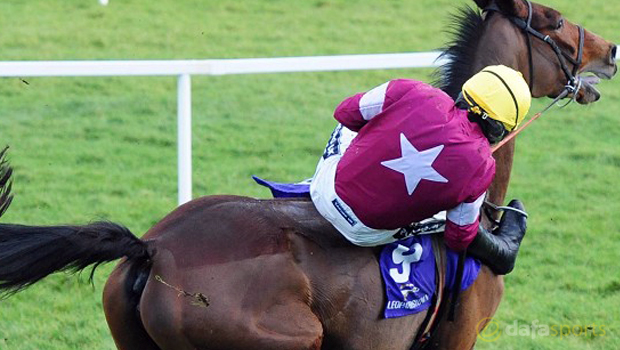 Willie Mullins believes Valseur Lido has earned a shot at the Cheltenham Gold Cup despite falling in the Irish version at Leopardstown.

Ruby Walsh and Valseur Lido travelled strongly in Saturday’s contest at the Foxrock track and were apparently going better than anything as they moved into the lead going to the final fence.

However, Valseur Lido stumbled on landing and promptly sent Walsh sprawling to the turf as last year’s winner Carlingford Lough rallied strongly up the run-in for a surprise repeat success.

Valseur Lido appeared to have got the measure of Road To Riches, narrowly beaten into third in last season’s Gold Cup at Cheltenham, and Mullins feels there were plenty positives despite the last-fence tumble.

He admits that owner Michael O’Leary has plenty of options to ponder, but Mullins feels Valseur Lido has shown he has the potential to be a real factor in the blue riband next month.

“He didn’t look like he was stopping, so he’s booked his ticket for the Gold Cup I thought there. Connections (Gigginstown House Stud) would have a lot of runners in the Gold Cup and Ryanair, but to me he wants every bit of the trip,” said Mullins.

“That was three miles on heavy ground and he was running a very good race and I thought it was a good trial for whatever he runs in.”

Favourite Road To Riches was racing prominently throughout the Irish Gold Cup and, reflecting on the race, trainer Noel Meade felt that may have contributed to his downfall, but he too remains keen on a run in the Gold Cup at Cheltenham.

“I think they just went too quick. He never got into a rhythm, and was back and forth a bit in the race,” said Meade. “He was only just beaten in the Gold Cup last year so I think he should go back there again.”