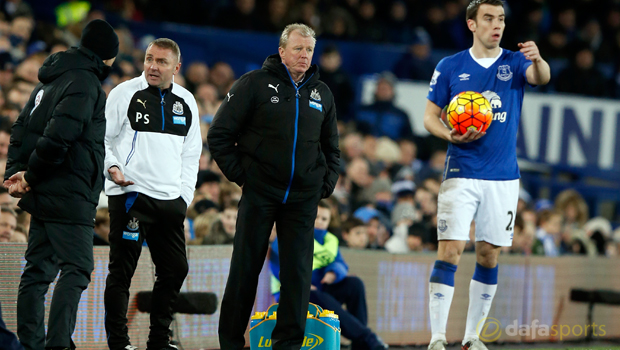 Newcastle boss Steve McClaren has demanded an instant reaction from his players against West Brom on Saturday following their dismal 3-0 defeat at Everton on Wednesday night.

The former England chief splashed out around £29million in the January transfer window to bring in Jonjo Shelvey, Henri Saivet and Andros Townsend on permanent deals, while Seydou Doumbia joined on loan.

Only Doumbia was missing from the starting XI at Goodison Park as the Toffees romped to a comfortable win courtesy of a first-half strike from Aaron Lennon and two late penalties from Ross Barkley.

McLaren had goalkeeper Rob Elliot to thank for preventing an embarrassing scoreline as he produced a string of fine saves, with the woodwork also saving the Magpies on three occasions.

However, the 54-year-old slammed the display as “unacceptable” while he bemoaned the loss of substitute Jamaal Lascelles to suspension after his red card for a professional foul in the build up to the second penalty in stoppage time.

Defenders Chancel Mbemba and Paul Dummett both also went off injured before half-time to leave McClaren down to the bare bones at the back looking ahead to the visit of the Baggies.

But he is expecting the players who he sends out on to the pitch “to be committed and fight”, with Newcastle currently occupying the final relegation place.

He said: “We need a reaction from individuals and collectively – 52,000 people will demand a reaction against West Brom on Saturday.

“We had bad results against Leicester and Crystal Palace [in November] where that [attitude] was questioned but since then it has been excellent.

“I felt it was disappointing we returned to that level and that is unacceptable.”