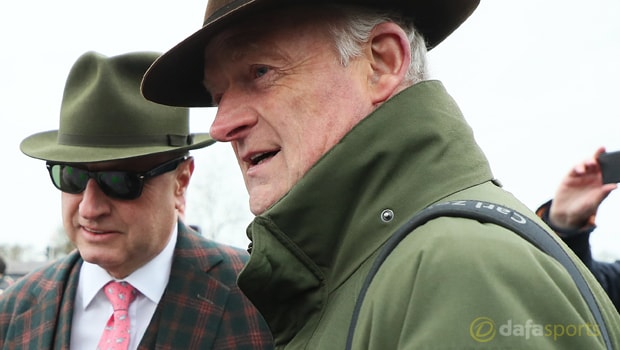 Willie Mullins says there is every chance that Douvan and Min could take each other on in next month’s Queen Mother Champion Chase at Cheltenham.

The pair are both owned by Rich Ricci and trained by Mullins. Both are genuine two-milers according to the Closutton supremo and, while admitting Ricci might prefer to see them kept apart, a clash in the two-mile Championship race is worth considering.

“We (Rich Ricci, owner) spoke about the possibility of running him and Min in the Queen Mother and we said it would be a nice problem to have if it comes around,” said Mullins.

“To me, the two of them are two-milers. Douvan is nicely on course for the race but Min is unbeaten this season so he has to go there.

“I can’t see us putting Douvan in the Ryanair, so it’s not ideal and an owner would like to divide his horses, but sometimes it’s no harm having a reserve.

“That’s their trip and to me that’s what they should go for.”

Min was an impressive winner at the recent Dublin Racing Festival, making amends for his Christmas setback, when he passed the post first at Leopardstown before losing the race in the steward’s room having interfered with runner-up Simply Ned.

Having at one stage been ruled out for the season, he is now thriving and only narrowly missed out on a run at Gowran Park this weekend.

“I’ve no regrets about not running, although when I worked him on the gallop [on Saturday] myself and Ruby (Walsh) looked at each other and said ‘should we be in Gowran’ but we just said no, we were happy we’d made the right decision,” Mullins told At The Races.

Min is 3.50 to win the Champion Chase, while Douvan is available at 5.00. Nicky Henderson’s unbeaten star Altior is favourite at 1.67.