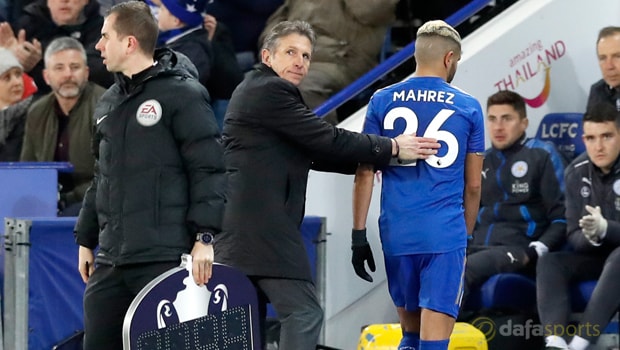 Leicester City have put the Riyad Mahrez transfer saga behind them according to manager Claude Puel.

Mahrez was restored to the Foxes starting line-up for the first time since his proposed move to Manchester City failed to materialise last month as Leicester overcame Sheffield United to reach the FA Cup quarter-finals.

The Algerian received warm applause from the King Power Stadium stands when his name was read out pre-game, while he got a standing ovation from the Leicester fans when he was taken off late in the game.

Mahrez impressed against the Blades, providing the second-half cross from which Jamie Vardy netted the decisive goal.

Puel says Leicester can now put the transfer saga, after which Mahrez went AWOL from training amid discontent over his situation, firmly behind them. “It’s behind us,” said Puel.

“Riyad came back with high quality and it is a good feeling for us of course.

“It was good support from the fans to Riyad and important to remain a good feeling for the future.

“I said before it was important to remain united after this situation but it was good in the end to see the good feeling.”

Mahrez was unfortunate not to get on the scoresheet himself late on before coming off, but his manager was satisfied, particularly in seeing Vardy and Mahrez’s partnership flourishing once more.

“The most important thing was to win the game and to see again Jamie and Riyad play together is a good feeling,” he added.

“Riyad was a little frustrated at the end of the game because he wanted to score, but that is good.”

Leicester are 13.00 to win the FA Cup this season.