Posted by Vincent Henderson on March 6, 2017 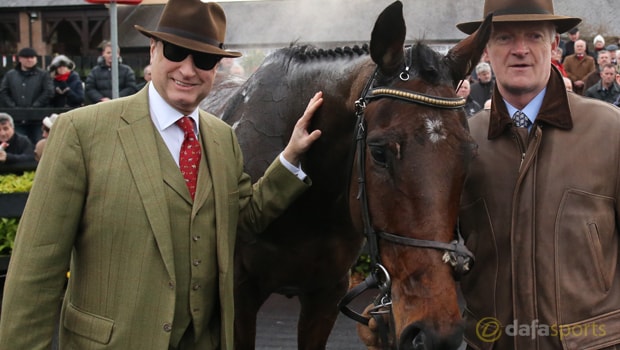 Willie Mullins was pleased after watching two of his high-profile Cheltenham Festival-bound stars go through their paces at Leopardstown on Sunday.

The trainer, leading handler at Cheltenham for each of the last four years, sent some of his contenders out to work in the traditional post-racing pre-Cheltenham schooling session at Leopardstown.

Amongst them were Gold Cup contender Djakadam and Yorkhill, favourite to land the JLT Novices’ Chase next week.

Djakadam has twice finished second in the Gold Cup but Mullins feels that having him fresh this time around could be the key to finally taking the race, which would be the trainer’s first Blue Ribband success.

The Rich Ricci-owned eight-year-old was given a lead by Arkle-bound Royal Caviar before heading his stablemate towards the end of the breeze in the hands of Ruby Walsh and Mullins was content with what he saw.

“Djakadam has not run since Christmas, but I think he is best when fresh and I was very pleased with him there today,” he said.

Yorkhill on the other hand is likely to be schooled again this week before making his journey to the Cotswolds.

Also partnered by Walsh as he worked with Blazer and Arbre De Vie, Yorkhill was somewhat fiddly at the opening pair of fences and was given time to find a rhythm before easily picking them off to come home first in their gallop to the line.

Mullins said of Yorkhill: “He went a bit left at the first few fences and then he jumped high and Ruby said he gave himself a bit of a fright early in the back straight, but he was electric after that when they went quicker.

“We might school him again before Cheltenham and he’ll go for the JLT.”

Yorkhill is 2.75 to win the JLT Novices’ Chase while Djakadam is 5.00 to land the Cheltenham Gold Cup.