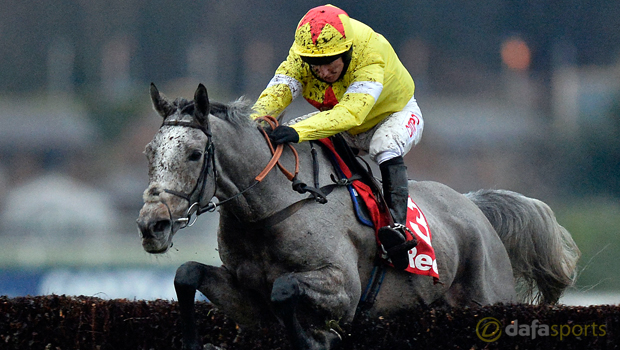 Unioniste will be given a chance to school over Aintree style fences by trainer Paul Nicholls in preparation for the Grand National on April 9.

The John Hales-owned grey was an early faller in the race last season and the owner, who teamed up with champion trainer Nicholls to take the race with Neptune Collonges four years ago, says he will be better prepared this time around.

Connections believe the Aintree fall left its mark on Unioniste and played a part in some sub-par efforts early in this campaign.

The eight-year-old got back on track with a strong staying performance over three-and-a-quarter miles in winning at Kelso on Thursday and afterwards Hales admitted the Grand National is the plan once more.

Hales says Nicholls is confident Unioniste will develop a liking for the Aintree-style fences.

He told reporters: “He’ll have the correct preparation for the Grand National and we’ve all decided we’ll school him over some National fences and see what happens.

“If it looks like he’s not enjoying it or he doesn’t have the confidence to do it, he won’t run at Aintree, but Paul is of the opinion that he will.”

According to Hales, schooling over national fences isn’t normally part of the Nicholls plan but they are making an exception in this instance.

Having been allocated 10st 8lbs for the Grand National, confidence is high that Unioniste can deliver a big performance.

“I think the problem in the National last year and in the Becher earlier this season was the fences took him a bit by surprise. Paul doesn’t tend to school them over National fences before they go there, but for Unioniste we’re going to make an exception,” said Hales.

“Maybe we went a year early with him last year, but I think he’s earned the right to go back and he’s been given a nice weight.”

Unioniste is 34.00 to win the Grand National while last year’s winner Many Clouds is 13.00 to triumph again.