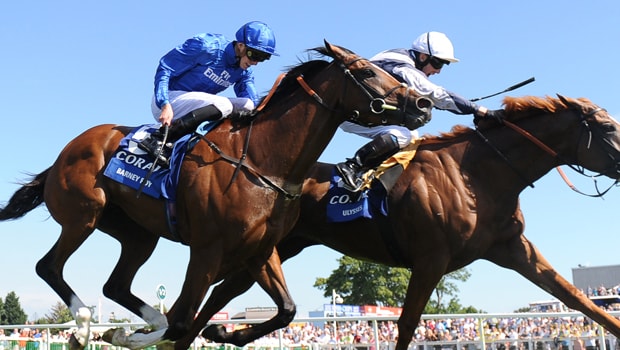 Trainer Richard Hannon has revealed Barney Roy is to be ridden with more restraint in Saturday’s Qipco Champion Stakes at Ascot as he attempts to finally get the better of Ulysses.

The Godolphin-owned three-year-old has twice locked horns with Sir Michael Stoute’s four-year-old this season and finished behind him on both occasions.

There was just a nose between them at the end of a scintillating battle in the Coral-Eclipse at Sandown in July, but a month later in the Juddmonte International at York Ulysses had more in hand as Barney Roy faded late on to finish third.

Barney Roy got into a battle for the lead with dual 2000 Guineas winner Churchill on the Knavesmire, with the pair trading blows from almost three furlongs out.

Whilst Hannon doesn’t attribute any fault to jockey James Doyle for the tactics employed, he says there will be a clear plan to get the best from Barney Roy on Champions Day.

“The general theory is that he did too much at York although I don’t think James [Doyle] did too much wrong and I like the way he decided to do his own thing,” Hannon said.

“We got into a battle with Churchill – taking each other on maybe two-and-a-half furlongs or three furlongs down – and it very much played into the hands of Ulysses.”

“I bet Jim Crowley on Ulysses couldn’t believe his luck seeing us two scrapping it out two-and-a-half furlongs from home.

Other than that our form is very closely tied in with Ulysses and there’s not much between us.

“We certainly won’t be setting it up for Ulysses this time. We’ll get a lead and sit in a little bit.”

Barney Roy is 5.50 to win the Champion Stakes on Saturday while Ulysses is joint-favourite for the race at 4.00 alongside John Gosden’s Cracksman.