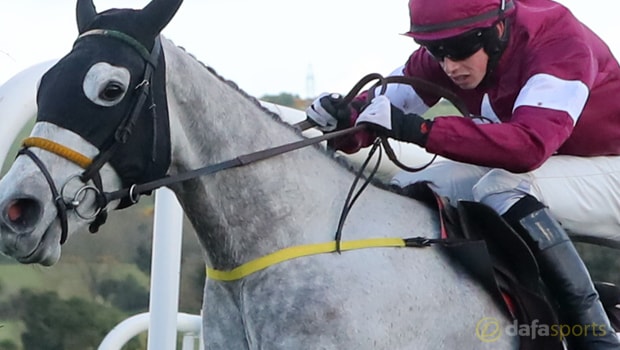 Trainer Noel Meade has elected to skip the King George VI Chase with his promising six-year-old Disko, insisting the race is simply too ‘hot’ to contest.

Disko was a dual Grade One winner as a novice last season while the grey made a successful reappearance in a Grade Two contest at Down Royal last month.

Meade had entered his charge in the Kempton showpiece but he has now confirmed the intention is stay in Ireland, citing the calibre of opposition for the Boxing Day showpiece as the main reason for staying at home.

With the likes of Might Bite, Bristol De Mai and last year’s winner Thistlecrack all confirmed for the three-mile Grade One at Kempton, Meade prefers his chances in the Leopardstown Christmas Chase, formerly the Lexus, even should that mean running Disko against stablemate and fellow Gigginstown-owned contender Road To Respect.

“Disko is not going to run in the King George. It looks a very hot race and it seems stupid to travel over there and run into all those horses when we can run him an hour up the road,” said the trainer.

“I’d say the plan would be to run him (Disko) in Leopardstown and if the other horse runs there as well, that’s sort of immaterial.

“If the two of them meet each other then it’ll work itself out.”

Disko may find things equally tough on home soil, with Cheltenham Gold Cup here Sizing John, along with Willie Mullins’ Yorkhill, both pencilled in for next week’s Leopardstown highlight.

Nicky Henderson’s Might Bite is 2.38 to win the King George at Kempton on Tuesday, while last month’s Betfair Chase victor Bristol De Mai is 4.50 for trainer Nigel Twiston-Davies.

Last year’s winner Thistlecrack is 7.00 to bounce back to his brilliant best and win a third successive King George for Dorset handler Colin Tizzard.