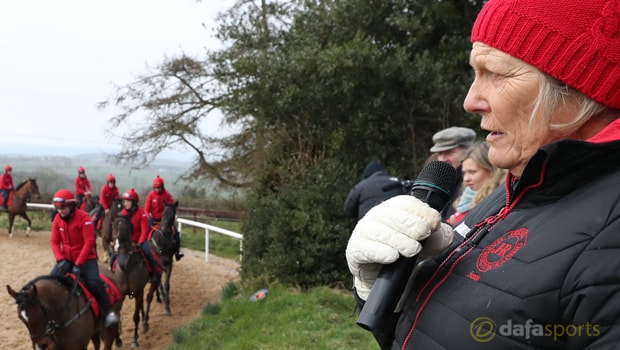 Trainer Jessica Harrington says it is a huge blow to the Potts family and the rest of the team after Sizing John was ruled out of the Cheltenham Gold Cup next week.

Sizing John produced a brilliant performance when winning the Festival showpiece last year, with the gelding holding off the likes of Minella Rocco, Native River and Djakadam.

The eight-year-old, who won back-to-back races at Punchestown following his Cheltenham triumph, was aiming to become the first horse since Best Mate to retain his crown at Prestbury Park next week.

However, jockey Robbie Power brought a concern to the attention of Harrington and the trainer has now confirmed Sizing John will not be able to attempt to retain the blue riband this year.

“He cantered as normal this morning but Robbie (Power) rode him and felt that he wasn’t quite right. During routine checks he was found to be sore behind,” she told the Racing Post.

“I’ve had our vet check him over and he found a hairline non-displaced fracture of his pelvis. This is a massive blow for the Potts family (owners) and all our team.

“It’s most unfortunate. We were very much looking forward to him going back to Cheltenham to try and win the race for the second time. He’s off on his holidays now.”

The Nicky Henderson-trained Mite Bite currently leads the betting for the Gold Cup at 4.00, while Native River, third in last year’s edition, follows closely behind at a price of 5.50.