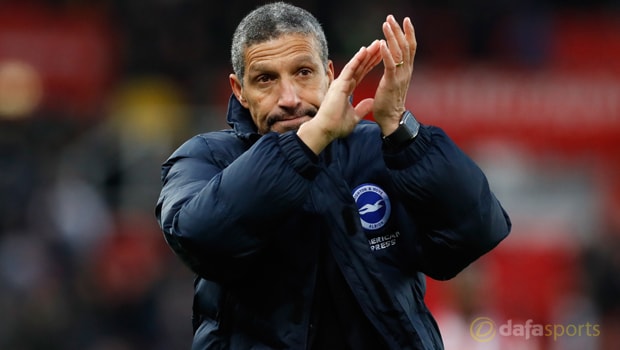 Brighton boss Chris Hughton has heaped praise on striker Glenn Murray amid speculation he could be on the verge of an England call-up.

Three Lions boss Gareth Southgate is set to name his squad on March 15 for a friendly double-header against the Netherlands and Italy and some reports are suggesting Murray could be in it.

Hughton says it isn’t his place to comment on that speculation, but he was willing to paint the picture of a supporting case for Murray’s involvement.

“It is probably not my position to talk about the merits of a player playing for England but what I can do is talk about what he has given us,” Hughton said.

“Glenn has always had a know-how on how to score goals but in a very competitive division where on a lot of occasions chances are going to be hard to come by in this division for teams like us.”

Murray has previous Premier League experience with Crystal Palace and Bournemouth but his running tally of 11 goals in 27 games this season for the Seagulls is already a personal best for the 34-year-old.

Whether the veteran hitman can force his way into the England reckoning so close to the World Cup in the twilight of his career is open to debate, but Hughton feels he has qualities to succeed in any environment.

“What you need is you need a work ethic, you need somebody who can lead the line and if I speak about his form, more importantly for us is the latter part,” he added.

“So for us he has been excellent and we have real good competition at the moment and of course for anybody that plays in them positions they would have had to have warranted it and he certainly has done.”

Brighton are 3.50 to win at Everton on Saturday, with Murray priced at 6.50 to net the opening goal at Goodison Park.