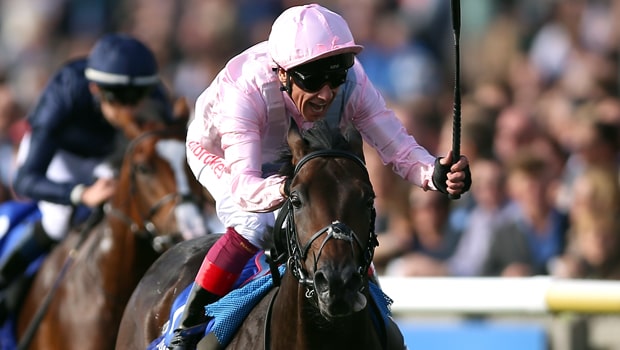 John Gosden and Frankie Dettori are excited by the prospect of seeing 2000 Guineas favourite Too Darn Hot back in action for his Classic campaign this season.

The colt was unbeaten last season and grabbed the title of champion two-year-old when he powered away from his rivals late in the race to win the Group One Dewhurst Stakes at Newmarket.

Having briefly looked ill at ease in the famous Newmarket dip, Too Darn Hot soon recovered his equilibrium as he came home almost three lengths clear of Advertise to make it four wins in four starts.

Dettori has been reacquainting himself with Too Darn Hot and feels the Dubawi has certainly grown up over the winter months.

“I’ve ridden Too Darn Hot in his last couple of bits of work. He seems well and he looks physically stronger, he has progressed well,” said the rider.

“He is an exciting horse, he is the champion two-year-old and I’m looking forward to riding him. He is rated 126 and I don’t think I’ve ridden a two-year-old rated higher.

“It (the dip) took him by surprise but Newmarket can be challenging. He is bouncing around and is very fresh. He has matured well.”

Too Darn Hot is the 2.10 favourite to land the season-opening British Classic at Newmarket on May 4. Like Dettori, Gosden is thrilled with the colt as he gets back into the groove ahead of a run in the Greenham Stakes at Newbury.

“He is training nicely and we are pleased with him,” said the Clarehaven handler. “Frankie sat on him at the weekend, was very pleased with his development from two to three and we are building towards the Greenham with him.

“I don’t want him to go and have to do a racecourse gallop, he would be much happier going down to Newbury, running over seven and just getting the cobwebs out the way.”