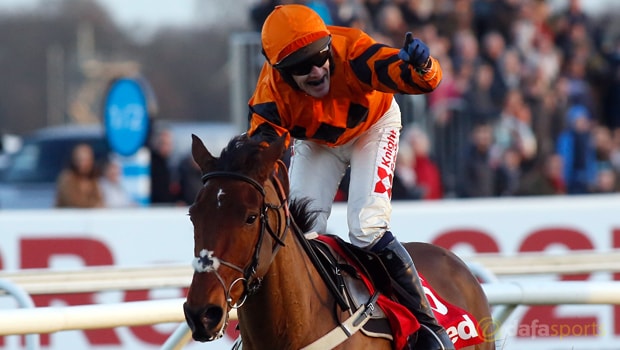 Jockey Tom Scudamore expects Thistlecrack to have learned plenty from this Cheltenham defeat on Saturday and is advising against writing off his Gold Cup hopes.

The brilliant King George winner was collared in a rip-roaring finish by the ill-fated Many Clouds, with just a head separating the pair after an enduring battle up the Cheltenham hill.

The 2015 Grand National winner Many Clouds collapsed and died after suffering a severe pulmonary haemorrhage in the aftermath of the Cotswold Chase.

Scudamore was quick to pay tribute to Oliver Sherwood’s charge having had time to reflect on the race, describing him as ‘brilliant’, but he feels Thistlecrack remains the horse to beat in the Gold Cup.

“It was unfortunate what happened afterwards but I think on the day Many Clouds was brilliant.

He was having his best performance and we were just fractionally below par. But I can’t make any excuses and I still feel going into Cheltenham (Festival) he’s the one they all have to beat,” he told At The Races.

The race marked just a fifth start over fences for last season’s outstanding staying hurdler and Scudamore feels he’ll have gleaned plenty from his marginal defeat.

The Gold Cup remains the ultimate goal this season and Scudamore is more than content Thistlecrack can rebound from his defeat and believes any questions about his jumping have been answered.

“If you look through history all the good horses – bar Frankel – are beaten at some point and I’d rather it was in January than in March,” he added.

“For a horse having his fifth run over fences, I thought he coped fantastically and he’ll learn an awful lot from it.

Any fears over his jumping, as far as I’m concerned, are non-existent.” Thistlecrack is the favourite for the Cheltenham Gold Cup at 2.75.