Jurgen Klopp insists finishing fourth would be worth celebrating 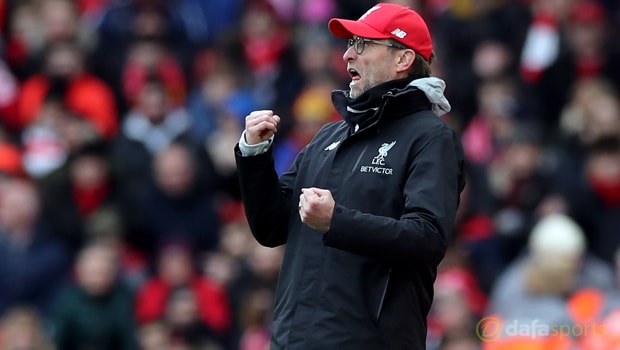 Manager Jurgen Klopp says Liverpool could have reason to celebrate this season if they finish fourth in the Premier League.

The Reds are enduring a torrid of form so far in 2017, with just a single victory from eight games since the turn of the year.

They’ve been knocked out of both domestic cup competitions, by Southampton and Wolves, placing huge doubts on their chances of winning a trophy.

Given how strong Chelsea have been so far, and the overall competitiveness of England’s top flight, Klopp believes Liverpool might well be celebrating if they can grab fourth spot and a chance to play Champions League football next season.

He said: “I think it’s possible we could qualify for the Champions League and should we then say, ‘Sorry, I know we lost here and there and that’s why we didn’t become champions’?

“Is it allowed to celebrate a position like this, in this league, in this strong league, with the outstanding run of Chelsea so far? I think, yes, it should be allowed that we celebrate something like this.”

Liverpool were the first team to beat Conte’s side in the Premier League this season when they won at Stamford Bridge in September and Klopp feels they’ll have plenty of people willing them to do the double.

“I’m sure a lot of teams in the league are on our side and want us to win,” he added. “That gap would obviously make the league a little bit more exciting for people.

“But that means nothing. We want to go for these three points and that’s enough to be motivated at the highest, highest level.”