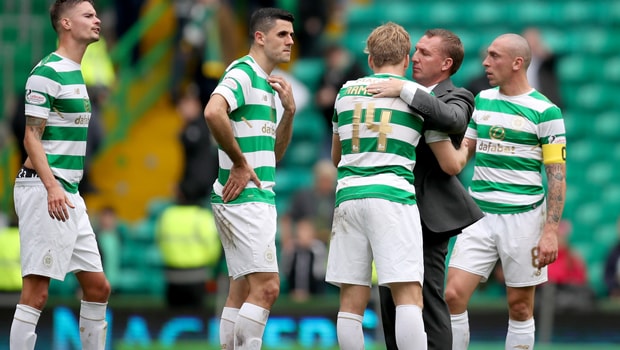 Former Celtic defender Darren O’Dea has claimed that the Hoops may struggle to keep all of their main strikers happy this season.

Celtic paid £8million for his services last month and he will now compete with fellow Frenchman Moussa Dembele and Scotland striker Leigh Griffiths.

Griffiths scored 13 in 39 games, while Dembele fired home 16 in 39 last season and manager Brendan Rodgers has got some thinking to do ahead of the new campaign.

O’Dea believes the former Liverpool boss may struggle to keep them all happy and the Dundee captain admits they all offer something different.

He told Sportssound: “How do you keep them happy? “They’ve spent a huge amount of money.

You’ve got Dembele, who’s getting touted for £30m and you’ve got Griffiths, who’s prolific and Scotland’s number one striker.

“Griffiths, he’s matured a lot and he’s done well but he ain’t happy when he’s not playing.

“I know people say, ‘Celtic play 60 games’. Well they’re not going to be happy playing 20 games each because if they play in the system they have played, which is one through the middle, it’s not enough.

“It’s not enough for any one of them. They’re all that good. They’re completely different.”