Samcro ‘the one to beat’ 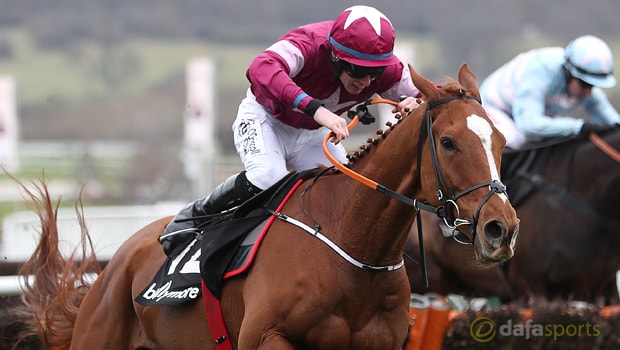 He may be stepping out of novice company into an open Grade One, but Samcro is the ‘one to beat’ in the Punchestown Champion Hurdle, according to Patrick Mullins.

Mullins’ father, Willie, trains Melon, the chief opposition to Samcro in Friday’s race but it will be hard to halt Gordon Elliott’s unbeaten youngster according to the former.

Samcro has won all seven starts under rules so far, including four this season since going hurdling. He justified the hype last month to win the Ballymore Novices’ Hurdle at Cheltenham and his trainer reports him to be in fine fettle.

“Samcro is in good order. We were obviously delighted with his performance at Cheltenham and he’s a horse that I feel very lucky to have,” said the trainer.

With Elliott now trailing Willie Mullins in their enduring battle for the Irish trainers’ title, owners Gigginstown have elected to pitch Samcro into the Champion Hurdle in the hopes of snaring the €162,000 first prize.

Melon finished second to Buveur D’Air last month at Cheltenham in the Champion Hurdle but, like Samcro, he could be winning in open Grade One company for the first time should be oblige at Punchestown. Patrick Mullins has doubts that he can lower Samcro’s colours.

“For my money Samcro is going to be hard to beat,” said Mullins.

“He’s obviously a novice stepping out into open company, but it’s the end of the season and we have won it with a novice before in Davenport Milenium (2002).

“Melon ran a fabulous race in Cheltenham and has come out of the race very well. I’m not sure how strong the Champion Hurdle form was this year, but he should make Samcro work.”