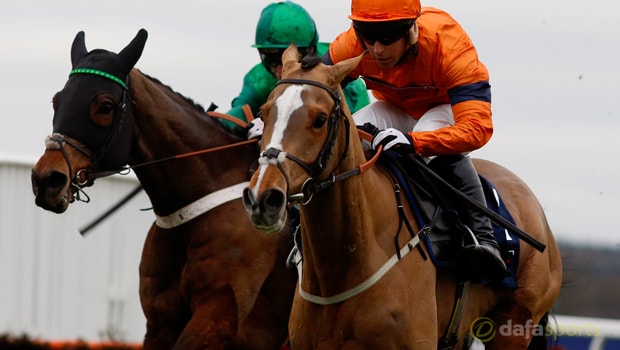 Sam Spinner was favourite to win the Stayers’ Hurdle at Cheltenham last month but could only come home fifth after having attempted to make all.

Reflecting on that effort, O’Keefe and jockey Joe Colliver feel that perhaps Sam Spinner lacked the experience to make it a true test of stamina, given that he was allowed an easy lead.

They are hoping there will be more pace on the front end at Aintree, while the soft ground is also set to favour Sam Spinner come Saturday.

“It was a special day for us, and we were thrilled to finish fifth in such a good race, but we did come away firmly believing we were capable of better,” said O’Keefe.

“Basically, it wasn’t enough of a stamina test for us, and we weren’t able to make it more of one.

“Joe [Colliver, jockey] felt the horse was just a bit inexperienced and could have done with more company up front in order to be more engaged in a stronger pace.

Ideally we’d like some company on Saturday, or maybe something to give us a lead until we get into a nice, strong rhythm.”

O’Keefe also admits to some relief that Cheltenham winner Penhill won’t be at Aintree, with runner-up Supasundae also absent.

Wholestone was third in the Cotswolds but O’Keefe feels that form can be reversed with a strong pace against Nigel Twiston-Davies’ charge.

“I’m glad Penhill isn’t coming over, as I was very impressed at how he picked up from the back of the field at Cheltenham in a race not run to suit him, and it’s good news too that Supasundae [ran in] Thursday’s race,” he added.

“It looks as if Wholestone will run, but I’m hoping we can reverse the form with a stronger gallop. I think he has a really good chance.”