Posted by Vincent Henderson on April 2, 2017 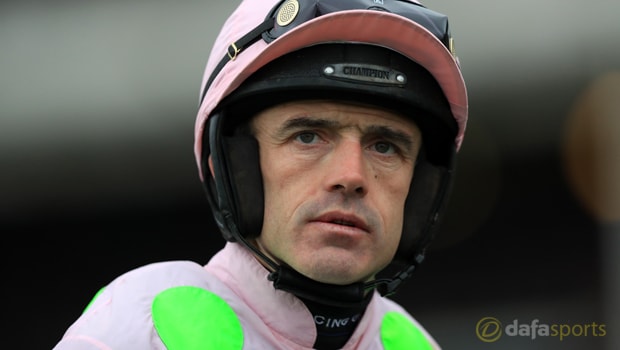 Ruby Walsh is expecting to ride Pleasant Company in next weekend’s Grand National at Aintree.

The leading rider has twice before won the world’s most famous steeplechase.

He rode Papillon, trained by his father Ted, to a famous success in 2000 while five years later he was on the Willie Mullins-trained Hedgehunter.

Walsh and Mullins have since formed a devastating partnership, claiming many of jumps racing’s biggest prizes.

Another Grand National success has so far evaded them but Walsh believes there is reason to believe that Pleasant Company could alter that on Saturday.

Mullins has confirmed that both Pleasant Company and Alelchi Inois are heading for Merseyside next week and, looking ahead to the race, Walsh says he is favouring the lightly-raced nine-year-old Pleasant Company.

Walsh steered Pleasant Company to a half-length success in the Bobbyjo Chase at Fairyhouse in February, beating former Irish Grand National hero Thunder And Roses into second spot as he did.

That win has given him confidence and, with a decent weight allotted, the jockey feels spring ground might bring about some improvement in Pleasant Company – despite what others believe.

“Plans are yet to be finalized, but as far as the Grand National is concerned I would be leaning towards riding Pleasant Company in favour of Alelchi Inois,” Walsh told Racing UK.

“He’s got 10st 11lb, which means he is the right side of 11 stone. He won the Bobbyjo Chase in good style from Thunder And Roses and the pair were well clear.

“I also like how he is a lightly-raced horse – he has run just 13 times under rules. People are put off by how he has done most of his winning on soft ground, but he is by Presenting and I actually think he might be better on drying ground.”

Pleasant Company is 17.00 to win the Grand National while stablemate Alelchi Inois is 67.00.

The David Pipe-trained Vieux Lion Rouge is the current favourite at 11.00.