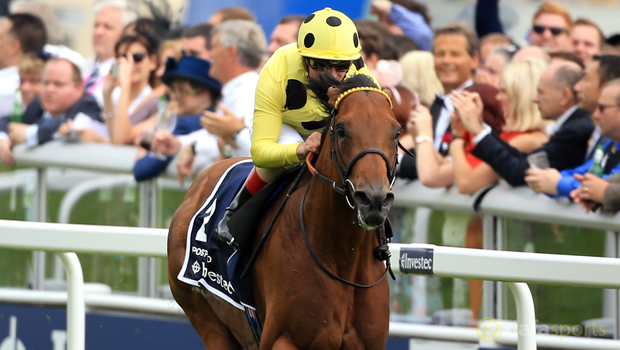 Trainer Roger Varian says Postponed will have to be at his best to land the King George VI and Queen Elizabeth Stakes at Ascot on Saturday.

Varian’s charge is seeking a sixth successive victory and is the 1.50 favourite ahead of the showpiece race, but the trainer is wary of the competition.

Dartmouth is available at 6.50, Highland Reel is 8.00 and Sir Isaac Newton is a 26.00 shot, and Varian feels Postponed has to be on top form if he is to claim a King George VI and Queen Elizabeth Stakes victory.

“You can’t go into these races not respecting the opposition,” Varian said, as reported by the Racing Post.

“They haven’t achieved what he has achieved yet but they are good horses, trained by excellent trainers.

He will have to be on his game. I don’t think at this level you can afford an off-day.” Varian may be reluctant to suggest a win on Saturday is a formality for his charge but he is already thinking about Postponed’s future options, including the Juddmonte International at York.

He said: “The King George is an important race and it’s going to be an achievement if he can win it twice. We’re excited about running him, being involved with the favourite is very exciting.

“We’d like to see if he could win a Group 1 over 10 furlongs and the race at York would be the obvious race to try to do that. It would be exciting to drop him back and clash with some of those mile-and-a-quarter horses.

“The Arc [Qatar Prix de l’Arc de Triomphe] and Breeders’ Cup Turf is a tentative schedule and we’ll take one race as it comes, starting on Saturday.”

Postponed is 6.00 ahead of next month’s Juddmonte International, with Time Test the current 4.00 favourite.