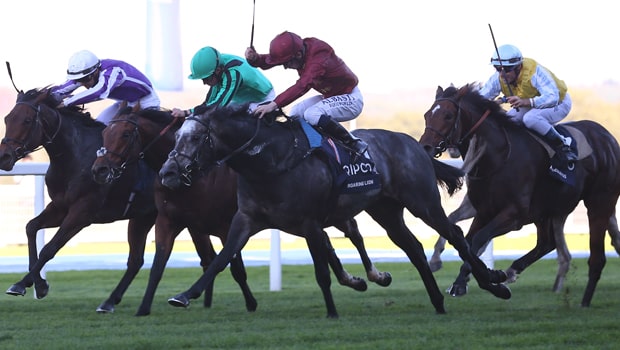 Connections of Roaring Lion insist they are happy to take a gamble at the Breeders’ Cup despite some claiming their charge will struggle at Churchill Downs.

John Gosden’s three-year-old has been a revelation this season in Europe and connections are ready to have one final run Stateside before he is retired to stud.

Roaring Lion, 9.00 to win the Breeders’ Cup Classic, has won four consecutive Group One races this season to grab the headlines.

Victories in the Coral-Eclipse at Sandown, the Juddmonte International at York, the Irish Champion Stakes at Leopardstown and the Queen Elizabeth II Stakes at Ascot have seen Roaring Lion’s stock rise to incredible heights.

David Revers, racing manager to owner Sheikh Fahad’s Qatar Racing operation, says the team are excited for the challenge and have no concerns about him running on dirt for the first time.

Redvers told At The Races: “Sheikh Fahad’s very much the driving force on it – he’s had a close eye on this race all the way through as an end goal.

“The horse has proven himself as the best three-year-old in the world on ratings, but obviously that’s only on one surface.

“He’s out of a Street Sense mare, so there is a case – albeit not a terribly strong case – that he’ll handle the surface.

Most of his dam line is actually more turf orientated, even though he’s American-bred, and the sire (Kitten’s Joy) is the king of turf over there.

“He has proven the most durable horse we’ve had anything to do with. He seems to put on weight every time he runs and gets bigger and stronger.

That’s the reason why, after a seemingly tough race in the QEII, we’re even considering what some might consider slight madness.

“It’s a gamble, but in Sheikh Fahad’s view it’s a worthwhile gamble.”