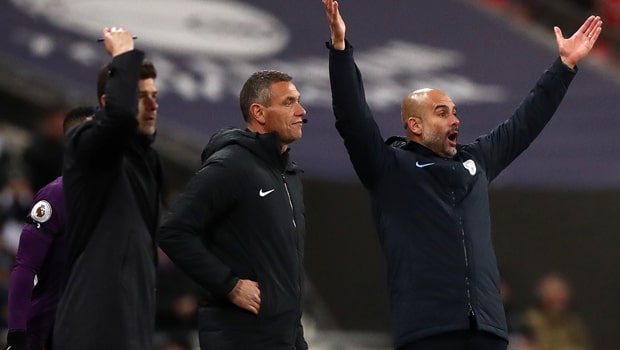 Manchester City manager Pep Guardiola is adamant his team can still improve after failing to take their chances in Monday’s narrow win over Tottenham.

City extended their lead at the top of the Premier League table after a 1-0 win success at Wembley.

Winger Riyad Mahrez opened the scoring during the early stages as he latched onto a pass from England international Raheem Sterling.

The Citizens, 1.40 to win the league title, wasted a number of chances in both halves to kill the game off, with star striker Sergio Aguero unable to find a way past Spurs goalkeeper Hugo Lloris.

Guardiola insists his team need to be more clinical in front of goal if they are to avoid being punished in future matches against their nearest rivals, with Erik Lamela having nearly punished the champions when he missed a golden opportunity to net a late equaliser for Spurs.

He said on Sky Sports: “We played today one of the most physical teams I’ve faced in my life because of Sissoko, Kane, Dier, Alderweireld, Sanchez and Dembele.

It’s incredible physicality and this pitch was so complicated. We missed some goals and we let them run.

“But we controlled quite good in terms of the difficulty to play on this pitch, especially in the first 15 to 20 minutes.

In the second half we should have the game over and that is the problem we have.

“In the big events, especially in the Champions League, we need to be more clinical in this situation because sooner or later we are not going to win. “I still feel we have a lot to improve.”

However, Guardiola admits the Wembley pitch did not help his team’s chances with an American Football game having taken place at the national stadium 24 hours previously.

He added: “It was a good game in difficult conditions. To play a football game on that pitch is not easy, and that’s why there are many mistakes that normally don’t happen.”