Rich Ricci refusing to give up on Douvan

Posted by chris schweizer on January 2, 2018 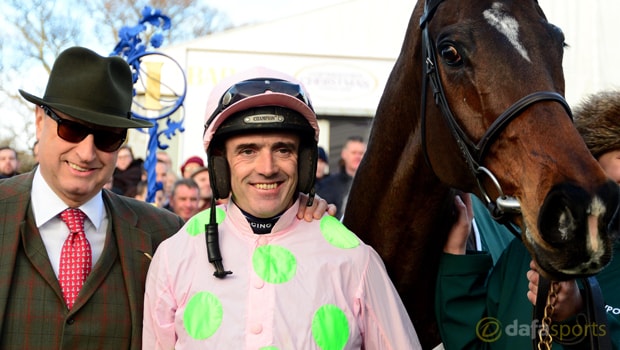 Owner Rich Ricci has claimed that Douvan could still run in a competitive race this season as he continues to recover from an injury.

The seven-year-old has not raced since March 2017 when he suffered a shock defeat in the Queen Mother Champion Chase at Cheltenham last March. Special Tiara eventually won the contest after a superb performance, but Douvan suffered a pelvic injury during the race and could only finish seventh.

Connections had been expected to enter him in the Tingle Creek Chase at Sandown but trainer Willie Mullins was not happy with him in the build-up.

Reports then suggested he could run at Leopardstown over Christmas but he has since been ruled out for the rest of the campaign.

However, Mullins’ team have yet to identify what the problem is and Ricci admits that he may still run this season.

Ricci told talkSPORT2: “Douvan is a real head-scratcher. We’re still not entirely convinced we know what’s wrong with him because he’s absolutely fine.

“As Willie said the other day, we are waiting for a final follow-up report from France to see what we need to do.

“At the moment he’s doing plenty of walking and we’ll have to see what happens.

“He deserves a chance to do himself justice. I’d love to have him back.

”I’m hoping we could get a run into him this season, but we’ll just have to see what the vets say and make a plan.”