Posted by chris schweizer on January 2, 2018 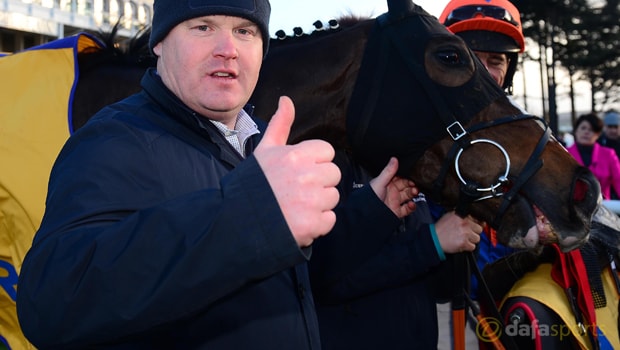 Trainer Gordon Elliott insists he was pleased with his team’s results over the festive period as his team now turn their attention to the Cheltenham Festival in March.

The Irishman had a busy few weeks over Christmas and New Year with many of his stable in action.

Elliott saw 17 of his stable win between Boxing Day and New Year’s Day as the hours of hard work continued to pay off.

The only blip was the performance of Death Duty who fell during the Racing Post Novice Chase at Leopardstown on Boxing Day.

The bay gelding had won his first three races over fences at Tipperary, Punchestown and Fairyhouse but he made a slight error during his run at Leopardstown.

He crashed out at the final fence and Elliott admits he is a little sore so connections are happy to bide their time with him.

Elliott told At The Races: “Death Duty is a bit sore after the fall and we’ll see where we go with him. There are no plans.”

However, the likes of Apple’s Jade, Shattered Love and Mick Jazz are all being trained for future runs after wins last week.

“We’ll have to keep Shattered Love in Grade Ones. You couldn’t knock her performance – she jumped, stayed and galloped.

“Mick Jazz will get an entry in the Irish Champion Hurdle and the English one. If he can nick a bit of prize-money that would be great, but the long-term plan is to go to America.”