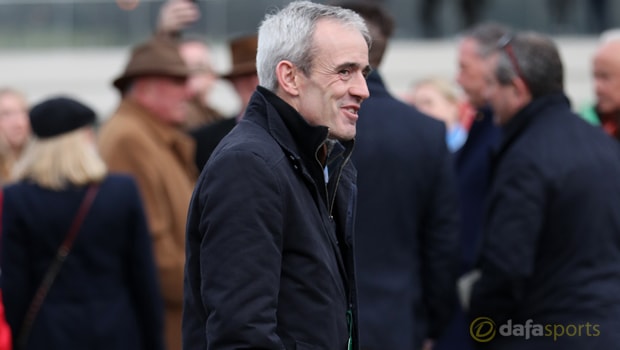 Ruby Walsh admits that returning to full fitness in time for the Cheltenham Festival has always been the “ultimate reward” during his spell out injured.

The leading rider is expected to return to racing at Thurles on Thursday, stepping up his preparations for Cheltenham next week in the process. He is the Festival’s all-time leading rider and makes no bones of the fact that being spot on for day one at Cheltenham is the primary goal.

Walsh, however, also knows that getting some race-riding in before Cheltenham is crucial and he is raring to go.

“I’m ready for action. I was hoping to go last weekend but the weather put a halt to that,” Walsh told Racing UK.

“We’ve several meetings rearranged for this week but we’ve still got lying snow and thawing snow, so what’s going to happen is uncertain. Hopefully I’ll be back Thursday or Friday with a bit of luck.”

“I’ve been riding out for dad (Ted Walsh) for the last two and a half weeks.”

Five times a winner of the Festival curtain-raiser in his career already, the Supreme Novices’ Hurdle has dominated Walsh’s thoughts during his recovery from a broken leg sustained in November.

He wants to strike the correct balance between getting some much-needed action in this week, and not jeopardising his Cheltenham chances in the process.

“It’s risk versus reward. For the last 15-and-a-half weeks the reward for me has always been the Supreme, so it’s how many risks do you take. Every time you ride in a race you take a chance,” he said.

“You have to balance up how many risks you are going to take before you get the ultimate reward and for me that has always been to walk out for the Supreme Novices’.”

Walsh is 1.73 to be the leading jockey at the Cheltenham Festival next week, while he could ride the Willie Mullins-trained 2.50 favourite Getabird in the Supreme Novices’ Hurdle on Tuesday.