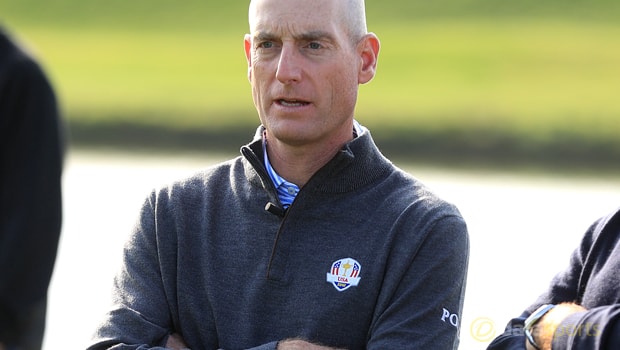 United States Ryder Cup Captain Jim Furyk admits it would be good to be presented with a dilemma over having Tiger Woods as a playing vice-captain later this year in France.

The 14-time Major champion has been named as one of Furyk’s assistants for September’s match in Paris but his form since returning from back surgery has led to suggestions Woods, 42, could yet make a playing return for the USA.

Woods has already revealed his desire to make his eighth appearance in the Ryder Cup as a player.

After taking a week off since earning a top-12 finish at the Honda Classic, Tiger will be back in action this week at Valspar Championship in Florida.

Furyk admits he was impressed with the swing speed of Woods at PGA National during the Honda, where he was ranked second in the driving distance statistics.

Having seen him back in action, the skipper admits he is open to the idea that Woods will be a playing member of Team USA in September.

“Is it possible for Tiger to be a playing vice-captain? I believe that it is,” Furyk said.

Hinting that Woods will perhaps have to qualify automatically if he wants to play, Furyk suggests they’ve agreed to leave the problem until it becomes a reality.

“We left our conversation on the topic of Tiger being a playing vice-captain with this: let’s cross that bridge when we get to it. But it sure would be a nice problem to have.”

Woods is currently 29.00 to win the Valspar Championship this week. Jordan Spieth is tournament favourite at 9.00 while Masters champion Sergio Garcia is 13.00.