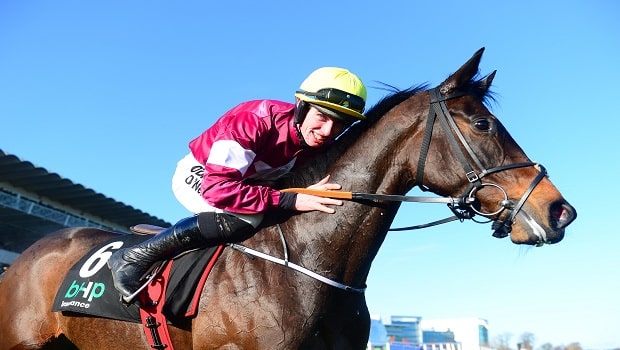 Connections of Apple’s Jade have been forced to rethink their Cheltenham Festival manifesto after her brilliant success in the Irish Champion Hurdle at Leopardstown.

The mare won the 10th Grade One race of her career in supreme style, landing the two-miler by 16-lengths from previous winner Supasundae, with Melon – close second behind Buveur D’air in last season’s Champion Hurdle in Cheltenham – no better than fourth.

It was an impressive display of front-running and slick hurdling from Apple’s Jade and forced connections to admit the Champion Hurdle – as opposed to the OLBG Mares’ Hurdle – come March 12 in the place for her. Apple’s Jade won the mares’ contest in 2017 though she was only third last year during an out-of-sorts spring.

Now aged seven, she looks better than ever this term and has won four-from-four so far – surprising her owner in doing so. “The situation is, we were genuinely surprised by how well she ran [at Leopardstown],” said owner Michael O’Leary.

“I thought she’d be beaten by Melon – coming back to two miles on ground that was too fast for her given she stays three miles – but she was so good you’d have to look at the Champion Hurdle on the back of that.”

That theory was supported by trainer Elliott and, with both the Co Meath handler and owners Gigginstown House yet to win a Champion Hurdle at Cheltenham, that race is now front and centre for Apple’s Jade next month.

“Up until [Saturday] I would have been very nervous, but to do what she did was very good, she loves a battle and I think Cheltenham suits her better than Leopardstown. “Nothing is concrete, but I’d say it’s likely [to be the Champion Hurdle],” said Elliott.

Apple’s Jade is 3.25 to win the Champion Hurdle at the Cheltenham Festival, with two-time reigning champion Buveur D’air now 2.75 favourite.