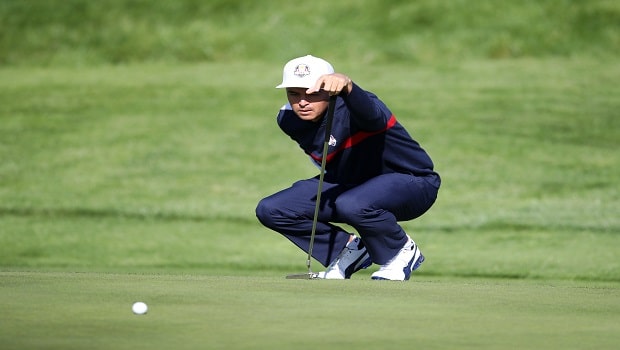 Rickie Fowler admitted it ‘wasn’t fun there for a couple holes’ after he survived a momentary collapse in the final round to win the Waste Management Phoenix Open.

Fowler carried a four-shot 54-hole lead into Sunday’s final round, and, with wet conditions making things tough, that advantage was intact through 10 holes despite the fact he was one-over par on his round.

Then came the madness. Fowler’s chip on the 11th went into water beyond the green and he took a penalty drop shot, which also rolled back into the hazard after he had declared the ball ‘in-play’, forcing him to take another penalty drop.

He found the green and putted in from distance for a triple-bogey seven but also dropped a shot on the par-three 12th, ensuring Branden Grace of South Africa suddenly led by two when he gained birdies at the 12th and 13th holes.

Fowler rallied with birdies of his own at the 15th and 17th holes and eventually had daylight to spare as Grace bogeyed the drive-able par-four 17th having found water off the tee.

Fowler brings a big entourage to the Stadium Course in Scottsdale, home of the most raucous atmosphere on the PGA Tour, and he admitted he was desperate to finally win having contended before in Phoenix.

He also suggested he’d rather avoid the mid-round drama in future. “This one is a little more special. It’s not just the normal event.

I love the atmosphere here, I love the fans,” Fowler said. “The amount of friends and family I have at this tournament, year after year, it’s been kind of disappointing the times that I’ve been in contention and not been able to pull it off with everyone here.

“There’s definitely more pressure at this event just because I want to get the win for a lot of other reasons, other than just myself. At the end of the day I’m glad I could do that.

“It really wasn’t fun there for a couple holes. The nice thing about going in with a 54-hole lead and having a bit of a cushion, it allows for mistakes. “Good learning experience. But, yeah, I don’t want to have to go through that again!”

Fowler is 21.00 to end his wait for a maiden Major crown by winning the US Masters at Augusta National in April.