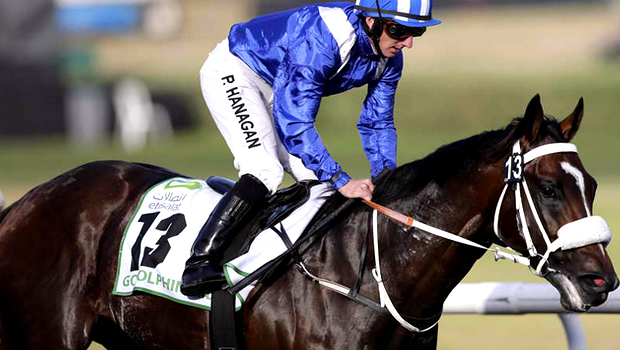 Exciting South African horse Soft Falling Rain is set to make his British debut in the Group 2 Hungerford Stakes at Newbury a week on Saturday.

Trained by Mike de Kock, Soft Falling Rain was a champion juvenile in South Africa, and won three times in Dubai, culminating in victory in the UAE 2000 Guineas.

The son of National Assembly runs in the famous colours of Sheikh Hamdan Al Maktoum, whose racing manager Angus Gold revealed: “He’s an intended runner in the Hungerford Stakes, and it will be his UK debut. We gave him a bit of a break to freshen him up and we’re looking forward to running him.”

The Newbury showpiece, run over seven furlongs, was won 12 months ago by none other than the subsequent Diamond Jubilee and Darley July Cup winner Lethal Force, and has been won by many other big names in the past.

Speaking of Aljamaheer, who also holds an entry at Newbury, Gold said: “He is scheduled to run in the Prix Jacques le Marois this weekend but if for any reason he doesn’t head there then the Hungerford is certainly an option.”

As is usually the case, the Hungerford Stakes can boast a high class set of entries, and this year is no exception. Trainer David Simcock may rely on recent Goodwood Lennox Stakes second Caspar Netscher, although he also has the Sussex Stakes fourth Trade Storm pencilled in.

Speaking of Caspar Netscher, Simcock said: “If he comes out of Goodwood ok then he’s more likely than Trade Storm to run at Newbury.

“We’ll just have to wait and see whether two and a half weeks between his races is long enough given he was coming back from a long time off the track. We were delighted with that first run back.”

Also entered are the John Gosden-trained pair of Fencing and Gregorian.

Fencing, winner of the Washington Singer Stakes at Newbury as a two-year-old, was sixth behind Garswood on his most recent start, while Gregorian was third in the Queen Anne Stakes at Royal Ascot in June.