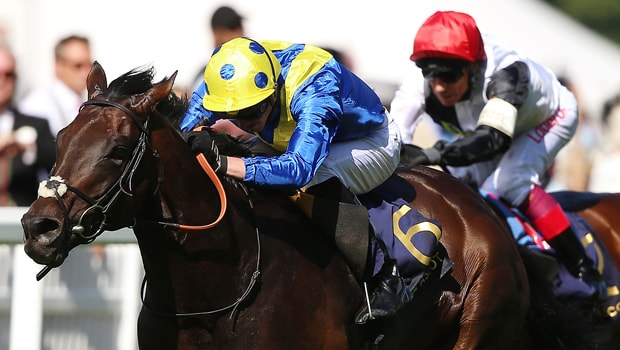 York’s Juddmonte International in August is being viewed as a likely target by connections of Royal Ascot winner Poet’s Word.

The Sir Michael Stoute-trained runner gained his first Group One win via a surprise victory over Cracksman in the Prince of Wales’s Stakes at Royal Ascot last week.

The progressive five-year-old now has a number of options open over a mile and a quarter and a mile and a half in the coming months.

The Coral-Eclipse at Sandown and the King George VI And Queen Elizabeth Stakes back at Ascot will be considered, but Stoute has other options in those races and it seems York’s Juddmonte International – a race Stoute won last year with Ulysses – is emerging as the top target.

“I don’t think he’ll go for the Eclipse, he could go for the King George, but Sir Michael also has Crystal Ocean (winner of the Hardwicke Stakes at Royal Ascot) and there wouldn’t be a lot between them,” said Bruce Raymond, racing manager to owner Saeed Suhail.

“Sir Michael usually makes the right judgement in these things. I’m sure that horse will go for the King George.

“Whether Poet’s Word does or not, it’s up to Sir Michael. A good race for Poet’s Word would be the Juddmonte International at York, which I think he’ll go for. Whether he’ll run before that, I don’t know.”

After finishing second to Hawkbill in the Dubai Sheema Classic at Meydan in the spring, Poet’s Word has landed the Group Three Brigadier Gerard Stakes at Sandown and the Prince of Wales’s Stakes at Royal Ascot since returning to action in Britain this season.

Stoute’s Crystal Ocean is the 3.50 favourite to win the King George VI And Queen Elizabeth Stakes at Ascot on July 28, while Poet’s Word is trading at 5.00.