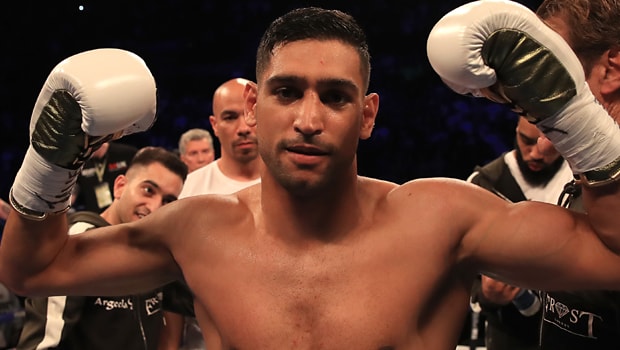 Amir Khan accepts he must first take care of Samuel Vargas before thinking about super-fights against the likes of Kell Brook or Manny Pacquiao.

The Bolton fighter will return to the ring at Arena Birmingham on September 8 in his second fight of 2018, following his 28-second demolition of Phil Lo Greco in April.

“One of my aims this year was to be as active as possible so I’m very happy to get back in the ring again so soon against Samuel Vargas,” Khan told reporters.

Big-fight promoter Eddie Hearn has pointed to a potential December showdown between Khan and domestic rival Brook – if the 31-year-old can see off his Canada-based Colombian opponent.

Talks about a fight with Brook have stalled over arguments centered on the purse split and which weight they will fight at, either welterweight (147lbs) or light middleweight (154lbs).

Khan says he must not look beyond Vargas, adding future blockbusters against Brook and former eight-weight world champion Pacquiao must wait.

“Vargas is a tough and well-schooled fighter, who has shared the ring with some top welterweights, including Danny Garcia and Errol Spence Jr,” he said.

“I have to get past Vargas before looking at the biggest challenges going forward. I’m not going to be taking Vargas lightly because I know he will be coming with everything on September 8.

“Expect the same excitement and fireworks as my last fight.”

Vargas, who has 29 wins, three defeats and two draws, said: “I have been granted more than enough time to properly prepare for Amir and you will see the best Samuel Vargas to date.

“Mark my words, we might both be from the same city and county, but I am nothing like Phil Lo Greco, that’s a guarantee – I’m going to give Amir hell.”