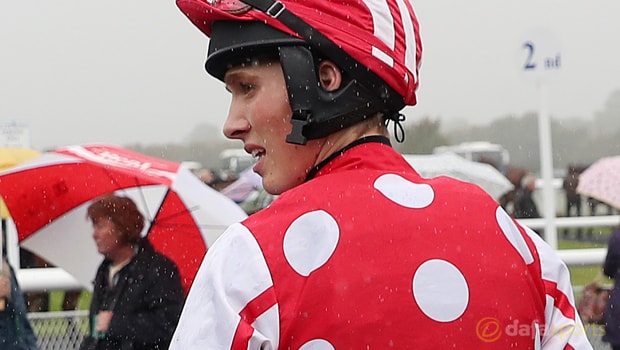 Paul Nicholls has thrown his weight behind Harry Cobden, insisting the teenager will handle the pressure of riding Cue Card in the Betfair Chase at Haydock.

Cobden, last season’s champion conditional based at Nicholls’ yard in Ditcheat, has been given the call by Cue Card’s trainer Colin Tizzard to ride in the Grade One on Merseyside, where the popular veteran will be bidding to win for the fourth time in five years.

Paddy Brennan’s partnership with Cue Card has been ended after their fall in the Charlie Hall Chase at Wetherby last week.

Brennan won five Grade Ones on Cue Card, but Saturday’s mishap was their second fall in three outings and a third overall, prompting Tizzard and owner Jean Bishop to opt for a change of rider.

Nicholls is happy to accommodate the opportunity for Cobden, and he insists the youngster can handle a massive occasion on the public’s favourite horse.

“His age won’t make any difference, he is a good jockey. He is a good lad who rides well and he will ride Cue Card well,” said 10-time champion trainer Nicholls.

“Riding in such a big race will be no problem to him whatsoever. He is very cool. It won’t faze him at all, that’s why he’s good. He’ll be fine.

“If he and Cue Card click and it goes well I will be well pleased for him. He has come a long way in a short time. You can only do your best trying to help those fellows.”

Cue Card is set for a racecourse gallop at Wincanton before racing on Saturday with stablemates Thistlecrack and Fox Norton.

Thistlecrack is 4.50 to retain his crown in next month’s King George VI Chase at Kempton Park.