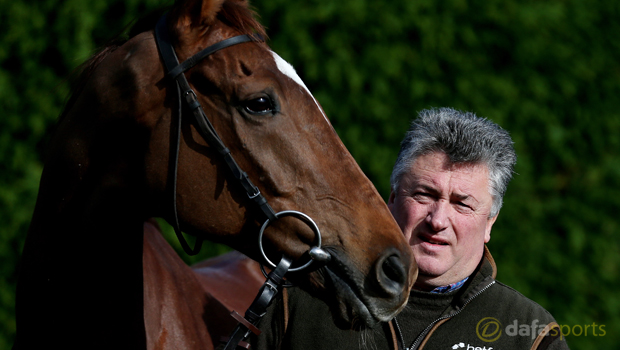 Paul Nicholls feels Silviniaco Conti could be “well in” for the Grand National after he bounced back to form at Ascot on Saturday.

Silviniaco Conti grabbed a seventh Grade One success of his career with a wide-margin success in the Ascot Chase.

David Pipe’s Dynaste plugged on to finish second but there was no doubting the star of the show as Noel Fehily’s mount galloped his rivals into submission in testing conditions.

The champion trainer was relieved to see the 10-year-old putting his problems behind him. Nicholls admitted he had encountered numerous issues when pulled up in the King George at Kempton last time out.

“I was mortified after the King George, I couldn’t believe how badly he ran,” he said.

“We had problems going into the King George and he pulled up at Kempton basically because he was hurting and also he was choking a fraction.

“We did his wind and had his palate cauterised and his sarcoids healed up, so he was not feeling any pain.”

Silviniaco Conti will definitely not be going to the Cheltenham Festival next month and his trainer says it will be one of two potential targets at Aintree in April instead.

“When he’s right he’s very good, but we’ve struggled all season. He won’t run in the World Hurdle, it will either be the National or the [Aintree] Bowl that he’s won for the past few years,” he added.

While he had been somewhat sceptical on Silviniaco Conti’s Grand National hopes before Ascot, Nicholls seems to have had a rethink given the pleasing return to form he witnessed and he says there are real similarities with his only previous winner of the Aintree marathon.

“The National is a definite possibility and I said to the lads that we will make the decision nearer the time. Arguably he is quite well in now,” added Nicholls.

“Neptune Collonges was the best horse I’ve run in the race (National) and I’ve always thought that Silviniaco Conti would follow him, as they are by the same sire.”

Silviniaco Conti is 17.00 to win the Grand National at Aintree on April 9.