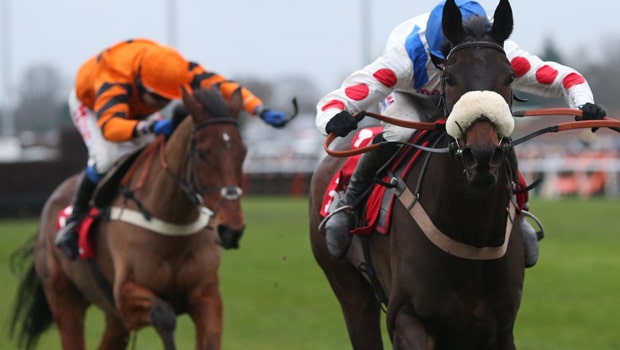 Paul Nicholls has talked-up Clan Des Obeaux’s bid for Cheltenham Gold Cup glory next month and says the rising star is worthy of more respect than he has been shown.

He travelled powerfully and jockey Harry Cobden was able to slipstream the Nicky Henderson-trained Terrefort running down to the final fence. Having cleared it, Clan Des Obeaux showed a nimble turn of foot to move away for a nine-length success and book his Gold Cup ticket in good style.

Having also won the King George at Kempton on Boxing Day after finishing fourth in Haydock’s Betfair Chase on his seasonal reappearance, Clan Des Obeaux is on a steady upward curve this season.

The seven-year-old merits more respect than he was shown following his defeat of former winner Thistlecrack in the Christmas showpiece at Kempton, according to his trainer.

“To be fair, he never got any credit for winning the King George,” he told reporters.

“Before the race, it was best King George for years – with Gold Cup winners and everything else – and afterwards it was a bit of a fluke!

“Like a lot of horses, it has taken him a while to get to that mature stage – to become a proper racehorse – but he is there now.”

The 10-time champion jumps trainer draws comparison with his iconic dual Gold Cup winner Kauto Star and insists Clan Des Obeaux is going to be a big threat in the Cheltenham Festival showpiece.

“Kauto Star was seven when he won his first Gold Cup, and this horse is the same age, so we are very much where we want to be,” Nicholls added. “I’m dead happy, and we can go to Cheltenham full of confidence.”

Clan Des Obeaux is now 6.00 to win the Cheltenham Gold Cup, alongside last year’s winner Native River in the betting with Presenting Percy the favourite at 4.00.