Patient approach likely for The New One 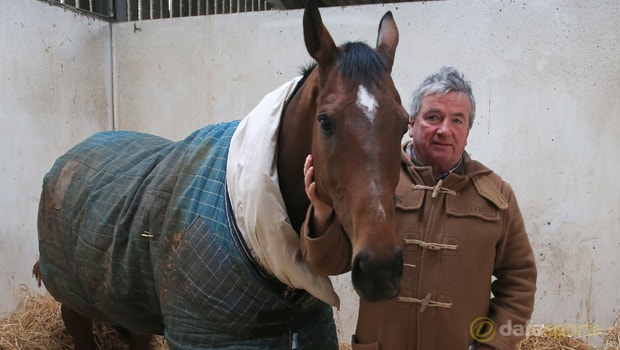 Trainer Nigel Twiston-Davies hopes that a patient ride from son Sam will help The New One see out the three-mile trip in the Stayers’ Hurdle at Cheltenham.

The popular 10-year-old is finally getting a chance to state his case over the longer trip, having finished no worse than fifth in the last four renewals of the Champion Hurdle.

An ever-present at the Cheltenham Festival since 2012, The New One gained his only a success a year later when he stormed up the hill to win the Neptune Novices’ Hurdle.

He’s come up short over two miles at Championship level since but there has often been a clamour to see him tried over the longer trip.

Despite winning a Haydock Champion Hurdle Trial recently, Twiston-Davies has now settled on the Stayers’ Hurdle as his target for this season.

The Naunton handler admits he’s far from certain over the trip although he has reason to be hopeful and suggests tactics will be designed to aid The New One on his first run over the distance.

“I’m not confident about The New One staying three miles at all. That’s why we’ve held on this long,” said the trainer.

“But he will be ridden differently. He won’t be making all. He’s won over two-and-a-half miles a few times but was he staying on at the end? I don’t know.

“He’s probably in the best form he’s ever been. I think his racing has been incredible this year. His rating is as high as ever. He’s the horse of a lifetime. He’s my best chance of a winner at the Festival.”

The New One can be backed at 11.00 to win the Stayers’ Hurdle at Cheltenham on March 15.

Supasundae is the 4.00 favourite for trainer Jessica Harrington after his impressive Irish Champion Hurdle win at Leopardstown.