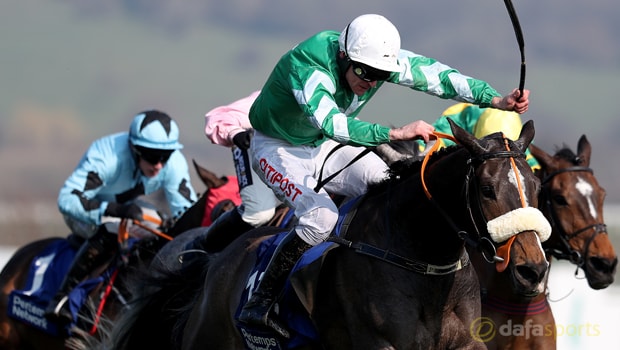 Trainer Pat Kelly admits the ground may not be ideal for his leading Irish Grand National candidate Mall Dini at Fairyhouse on Monday.

Mall Dini was just denied in the Kim Muir at Cheltenham this month, failing to get past Missed Approach on ground that came up softer than ideal.

It was the sixth time in ten starts over fences that Mall Dini has finished in the money, though he’s yet to win over the larger obstacles.

He was bidding to give trainer Kelly a remarkable fourth Cheltenham Festival winner from his small string.

Mall Dini and Presenting Percy landed him back-to-back renewals of the Pertemps Final in 2016 and 2017, while the latter romped to victory in this year’s RSA Chase and is now amongst the favourites for next year’s Cheltenham Gold Cup.

Kelly has booked Mark Walsh to ride Mall Dini in the Irish National and he’s hopeful, despite the prospect of soft ground once more.

“Mark has ridden Mall Dini a few times and knows him.

The horse is in good form and, while he’d prefer better ground than we look like having, we’re looking forward to running him,” said the trainer.

Kelly wants to get the opinion of Patrick Mullins, who was on board in the Kim Muir, about retaining headgear before making his final declaration for Ireland’s richest handicap over jumps.

“He wore blinkers for the first time in the Kim Muir and he worked without them on Wednesday.

I’m going to talk to Patrick, who rode him at Cheltenham, before deciding whether we’ll use them again on Monday.”

Mall Dini is 11.00 to win the Irish Grand National. The Willie Mullins-trained Bellshill is 9.00 while Gordon Elliott’s Grade One winner Outlander is currently 21.00.