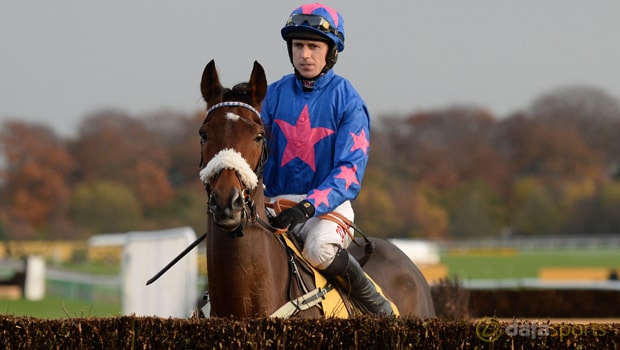 Jockey Paddy Brennan has warned Cue Card should not be easily written off ahead of Monday’s King George VI Chase at Kempton.

The reigning champ comes into the race off the back of last month’s outstanding victory in the Betfair Chase at Haydock.

The ever-popular Cue Card will be attempting to win the second leg of the Jumps Triple Crown and set himself up for another tilt at the £1m Bonus come the Cheltenham Gold Cup in March.

Brennan has formed a sparkling relationship with Colin Tizzard’s Cue Card since taking over from the trainer’s now retired son, Joe, in the saddle.

The biggest threat to his Kempton crown comes, ironically, from stablemate Thistlecrack.

Last season’s outstanding staying hurdler is relishing the transition to chasing and connections have elected to pitch him into the Grade One three-miler on Boxing Day to see how he matches up against the best in the business.

Thistlecrack and Cue Card are now joint favourites for the race at 2.38. Brennan was down at Tizzard’s yard in Dorset to school ten-year-old Cue Card this week and the Irishman suggests there was no indication whatsoever that he is ready to vacate his throne, quite the opposite insists Brennan.

“I went down to Colin Tizzard’s [on Wednesday morning] and sat on him for the first time since winning the Betfair Chase last month – and he felt great,” Brennan wrote in his blog.

“In fact, he felt as good, if not better, than ever. “I schooled him over fences, he jumped great, and I couldn’t be happier with him.”