Posted by chris schweizer on February 1, 2018 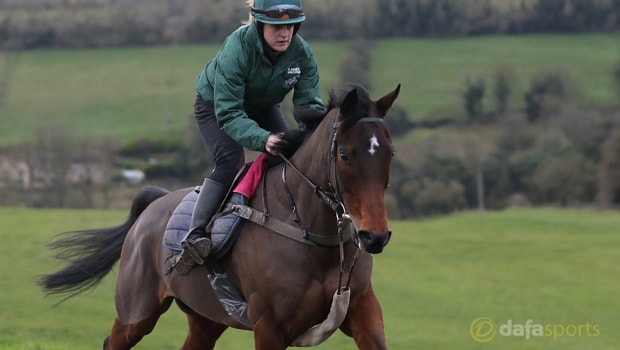 Nigel Twiston-Davies has ruled out a run in the Cheltenham Gold Cup for leading Grand National contender Blaklion.

The nine-year-old won the RSA Chase at the Cheltenham Festival in 2016 and has since gone on to establish himself as a leading performer over stamina-sapping trips.

He was fourth behind One For Arthur in last season’s Aintree National and impressed in December at the Merseyside track when running out a decisive winner of the Becher Chase having been a strongly backed favourite.

Haydock’s Grand National Trial is now the likeliest stopping point before returning to Aintree in April for the big one.

“The Gold Cup is looking doubtful. I had a talk with the owners and we’ll just head for the National I’d expect.

We’re thinking we’ll go to the Grand National Trial at Haydock; that could be his next run,” said Twiston Davies.

Meanwhile the Naunton handler admits he’s at a loss as to where to go next with Bristol De Mai.

The grey recorded a record-breaking win in the Betfair Chase at Haydock in November, a track at which he has enjoyed repeated success.

He then disappointed in the King George at Kempton on Boxing Day and was last weekend turned over in the Cotswold Chase on Trials Day at Cheltenham. The Grand National is amongst the possibilities for him.

“Bristol De Mai was disappointing and we don’t really know what we’re going to do with him yet,” added Twiston-Davies.

“He’s entered (for the National) and he’s got lots of alternatives.”

Blaklion is favourite for the Grand National at 11.00 while Bristol De Mai can be backed at 26.00 for the Aintree marathon on April 7.