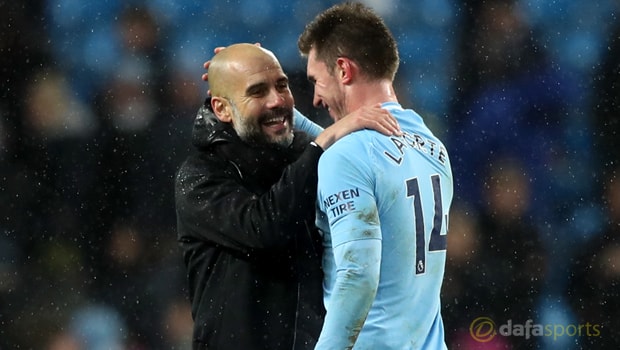 Aymeric Laporte insists he will take every opportunity to learn from Manchester City boss Pep Guardiola and hopes he can earn a place in France’s World Cup squad.

The 23-year-old completed a £57million move to City on Tuesday and has become the club’s sixth signing this season.

Laporte could make his debut as early as Wednesday when City welcome West Brom to the Etihad for their Premier League clash.

The central defender was known at Athletic Bilbao for his ability to play from the back and he often shows incredible composure in possession so undoubtedly fits into Guardiola’s plans.

Guardiola has already worked wonders with his players since taking charge a year-and-a-half ago and Laporte insists he is ready to learn from the Spanish tactician.

Laporte said: I have always followed him (Guardiola), when he was with other clubs as well. I have always been fascinated by him, especially when I have had the chance to watch him.

“I have had some contact with him. We both have the same style of play, so that’s great! “Obviously having Pep Guardiola as a manager in your team changes lots of things.

He is a very prestigious manager and we must take advantage of that to learn and to improve.”

Laporte is yet to win a senior cap for his nation, who are priced at 7.00 to win the World Cup, but is dreaming of forcing his way into Didier Deschamps’ plans ahead of the 2018 World Cup in Russia.

He added: ” I hope so (it will boost his chances of making the World Cup).

“I’m coming to a big club to achieve great things and obviously, the World Cup is a big thing.

“We need to work hard until the end of the season, I need to put in great performances, keep growing and try to be able to be called up for Russia.”