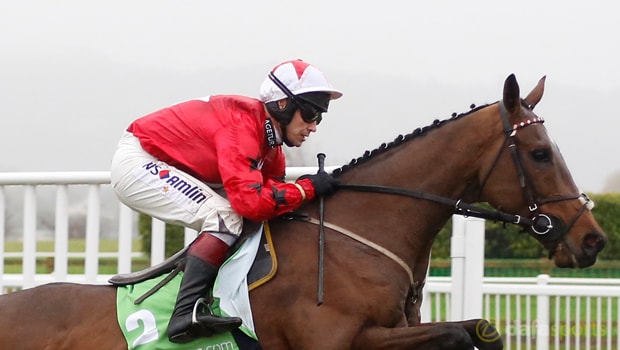 Nigel Twiston-Davies is content to shelve plans to send The New One chasing after he won a third International Hurdle at Cheltenham on Saturday.

The eight-year-old was due to make his fencing bow at Exeter last weekend but the meeting was abandoned due to frost.

That meant Twiston-Davies pitched his charge over hurdles for the International, a race he previously claimed in 2013 and 2014.

Making all the running under champion jockey Richard Johnson, The New One jumped impressively and easily repelled the challenge of My Tent Or Yours coming up the Cheltenham hill for a decisive success in the two-mile Grade Two.

The New One now looks set for another campaign over hurdles, with Kempton’s Christmas Hurdle a possible option later this month.

“He’s only eight, and eight is young. We’ll put chasing out of our minds until next year anyway,” said Twiston-Davies.

“If we can’t win hurdles, we’ll go chasing. We’ll look at the Christmas Hurdle and the race at Haydock (Champion Hurdle Trial) in the middle of January.”

The New One has three times tried and failed to win the Champion Hurdle at Cheltenham and while Twiston-Davies admits he may now be up against it in his bid to win the two-mile Championship contest, he is refusing to throw in the towel.

“We will bash on towards another Champion Hurdle. He probably isn’t quite good enough now,” he said. “He certainly was three years ago when he was unlucky not to win.

With different riding tactics now he is going straight maybe he can do it.” The New One is 17.00 to win the Champion Hurdle in March, with reigning champion Annie Power 3.50 to cling onto her crown.