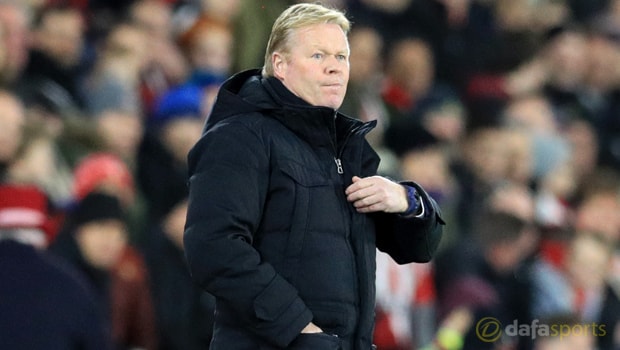 Ronald Koeman accused his Everton side of being too passive after they slipped to a fourth straight away loss at Watford.

The Toffees have managed just one win in 10 Premier League games dating back to September and their manager is concerned that they are not taking advantage of promising positions.

Romelu Lukaku put Everton ahead at Vicarage Road on Saturday but they failed to build on the lead. Watford scored three goals before Everton rallied strongly and Lukaku cut the deficit.

They were unable to force a draw, however, and Koeman feels that his side are only performing at their best after the damage has been done.

“The team is too passive and it’s not proactive – it’s reactive. Maybe (there was) fear and they felt afraid at 1-0. That should give everybody confidence.

The reaction was too late, we’re not taking the initiative in a game,” said the Dutchman.

The former Southampton boss made a fine start to life on Merseyside, with Everton picking up four wins from their first five after an opening-day draw with Tottenham at Goodison.

Things have gone alarmingly wrong since they lost to Bournemouth in September and Koeman feels the confidence is not there right now – even when they find themselves in front.

“I know it’s maybe a lack of confidence but if you start a game well and go 1-0 up you need a bigger belief, not going back and defending and being nervous.

That’s the big problem in my opinion,” he added. With tough games looming against Arsenal and Liverpool before Christmas, Koeman admits results are leaving him worried although his team are unbeaten on home soil and that is one positive the manager is clinging to.

“Maybe it’s good we play them at home because we are strong at home, away we have more problems. They are good teams – but we can beat them,” said Koeman.