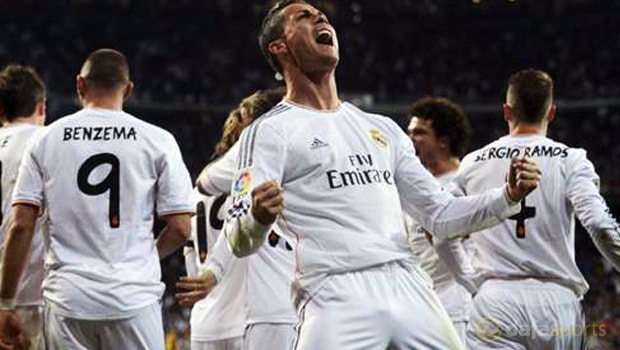 Real Madrid made it 35 games unbeaten in all competitions as they rallied to beat Deportivo La Coruna 3-2 at the Bernabeu on Saturday.

The win lifted Zinedine Zidane’s side six points clear in La Liga once more and ensures they are unbeaten in 15 games this season in the Spanish top flight.

Sergio Ramos was the hero for Madrid again, glancing home a stoppage-time header from a Toni Kroos corner to give his side a come-from-behind victory.

The central defender had a week earlier rescued Real with a last-gasp goal to salvage a 1-1 draw with arch-rivals Barcelona in the Nou Camp.

Madrid were without Cristiano Ronaldo and Karim Benzema in a much-changed line-up but they appeared destined for a regular success when Alvaro Morata curled home the opening goal shortly after half-time.

Sub Joselu stunned the Bernabeu with a brace in three minutes to turn the game on its head midway through the second half.

Zidane made changes and they paid off when subs Lucas Vasquez and Mariano Mejia combined six minutes from time, the latter heading home the equaliser.

That left the stage clear for Ramos, who hailed the belief of the Madrid squad afterwards. “You fight until the very end, with faith, with enthusiasm, with commitment, and things go your way,” Ramos said.

Zidane too paid tribute to the unswerving desire to win his players have shown during their record-breaking run.

“We know that we can do big things like we did tonight. Thirty-five games without a loss gives you strength.

One day we will lose, but the good thing about this team is that it always believes,” said the Real boss. Real Madrid are 6.50 to retain the Champions League crown this season.