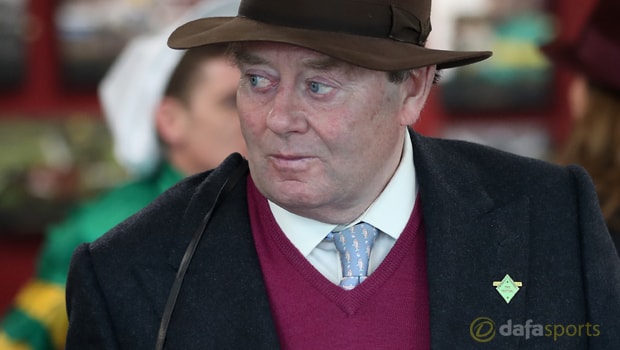 Nicky Henderson expects to make a decision after this weekend on whether or not to send three of his biggest guns to next week’s Aintree Grand National meeting.

The Seven Barrows handler suggests there are some pending pieces of work to complete this weekend and he’ll then be ready to make a decision.

“They’ve all got a bit of work to do over the weekend and we’ve got to be very happy with that. That is going to finalise things,” Henderson said.

“It’s just quite hard to read them. They can seem fresh and well and make you feel very happy in yourself, but you never quite know how much those races have taken out of them. Nobody got an easy race at Cheltenham this year because of the ground.

“We’re still monitoring, monitoring the situation as we go.”

After winning the Champion Hurdle last year, Buveur D’Air went to Merseyside and won the Aintree Hurdle, he holds an entry to defend that crown on Thursday, while Might Bite has an option in the Aintree Bowl on the same day.

Henderson has raised the possibility that unbeaten jumper Altior might tackle two and a half miles for the first time in the Melling Chase on Friday, though the Celebration Chase at Sandown – a race he won 12 months ago – is also still on the radar.

Might Bite is rated a 7.00 hope to win next season’s Cheltenham Gold Cup while his Cotswolds conqueror last month Native River is 7.00 to retain his crown.