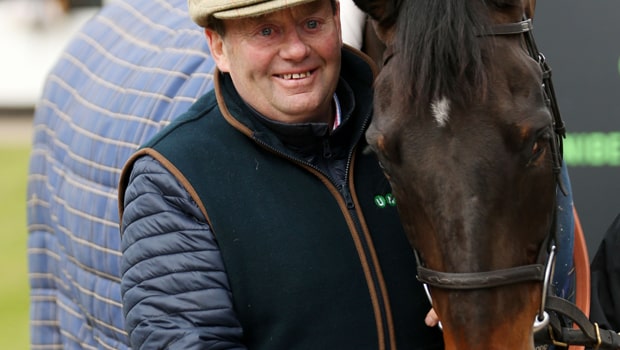 Trainer Nicky Henderson has conceded he will need to rebuild Might Bite’s confidence after he failed to shine at Haydock on Saturday.

The nine-year-old was one of the leading contenders for the Grade One Betfair Chase but he never got going in a highly-competitive race.

The bay gelding was partnered by regular jockey Nico de Boinville but he trailed behind and finished 29 lengths behind eventual winner Bristol De Mai.

Native River finished just behind in second and the trio are expected to compete in the King George VI Chase on Boxing Day.

Henderson insists nothing has come up after scans searched for an injury and the Lambourn trainer admits he has plenty of work to do.

He told Racing UK: “He’s fine. It was a bit of a bombshell, but he’s perfectly sound and bright – and there are no injuries anyway, no reason for it behind that.

“You know how fluently and flowing this horse jumps, and there was no rhythm to it yesterday at all. I think he was just fresh and well, and bounded down to one, and it gave him a fright.

“Even when he went to Ffos Las for his first novice chase, he did the same thing – and got beat.

Then he started to get belief in himself and I’m afraid, I think (at Haydock) he just lost his own belief and lost his confidence a little bit.

“He wasn’t tired. I just think his game had gone to pieces a little bit.”

Might Bite remains 4.00 favourite for the King George, while Native River is well fancied at odds of 6.00.