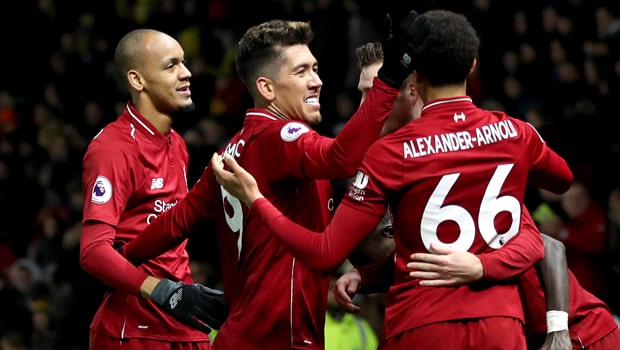 Liverpool coach Jurgen Klopp is confident Roberto Firmino will silence his critics after he ended his goal drought against Watford on Saturday afternoon.

The Brazil international scored the third goal in the 3-0 win at Vicarage Road as Liverpool continue to put pressure on Manchester City at the top of the table.

Firmino has scored just three goals in 13 appearances, with his last one in the Premier League coming on September 15.

However, the former Hoffenheim man played a part in Mohamed Salah and Trent Alexander-Arnold’s goals and Klopp has been quick to defend his talisman.

He said: “It all depends to what you want to see, what you expect, with what you compare it to.

“In the game against Fulham, 20 German coaches were in the stadium – I’m not sure how the critics were but when I saw them and we had a drink together, they were saying ‘Bobby Firmino! What a player!’

“Because of the small things he’s doing, he’s working so hard, he’s here, he’s there, he’s got six goals but he opens 5,000 gaps for everybody.

“He’s doing the job – that makes him so unbelievably valuable for us. I’m really happy for him.

“It’s just about what we have to do in the right moment – we have to find a system where we can bring our quality on the pitch, and on Saturday we did it.”

Firmino will be expected to start Wednesday’s Champions League meeting with Paris Saint-Germain.