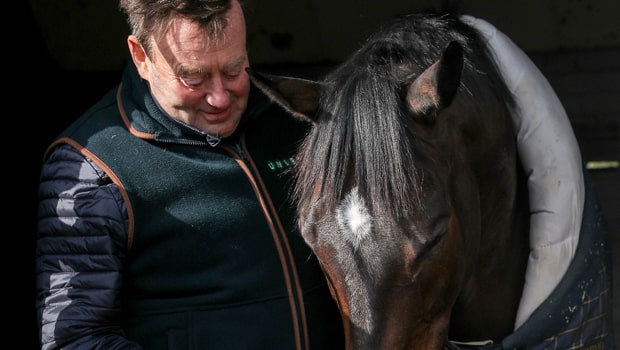 The superstar remains unbeaten over jumps, with his latest Grade One score making it 17 starts without defeat.

Despite jumping to his left at times, Altior had few problems swatting aside Fox Norton and Diego Du Charmil in the Clarence House, with rider Nico De Boinville sending him on a mile from home in what threatened to become a falsely run race.

Henderson was unperturbed by the tendency to jump left around Ascot’s right-handed track.

“It’s the sort of thing you see horses do around here,” said Henderson.

“He doesn’t need to go left, but we know he’s so much better at Cheltenham. If something came to him I think he’d have gone again – he was idling a bit.

“Yes, he did drift left. But it’s not his natural thing – he’ll be going left (handed at Cheltenham) next time.”

With his latest victory, Altior has put himself on course to equal the all-time record of 18 successive victories over jumps achieved by Big Buck’s.

He may equal that tally in the defence of his Queen Mother Champion Chase crown at the Cheltenham Festival in March, and his trainer is relishing that target.

“You are getting to an extraordinary sequence if you like, that he is building up,” said the Seven Barrows trainer.

“We know where we are going next, and he won’t run again before Cheltenham – that’s why I rather wanted to do it this way.

“There are two Grade Ones and a Grade Two along the way – take that, then freshen up for Cheltenham – because that is the main objective.”

Altior is favourite at 1.40 to win a second Queen Mother Champion Chase at Cheltenham on March 13.